kingrat wrote:The Constant Nymph is high on my list, too, and the Nicholas Brothers tribute sounds intriguing. Absolutely gotta see Went the Day Well? and Hayley Mills introducing Whistle Down the Wind. The get-together on Thursday afternoon is maybe #1 on the list. Want to see the Laugh-O-Grams either Thursday or Sunday.

Yes, Went the Day Well is for me too. "Hello Mr. Brownlow!" I forgot to mention Hoop-La and Hayley Mills for Summer Magic. Everyone sing the "The Ugly Bug Ball"! I'll probably Laff-O-Gram on Sunday?
Top

Your enthusiasm is catching...
I'm so excited for all of you and hope you have a great time.
We'll look forward to lots of star-filled news!
Top

Have a great time everyone! 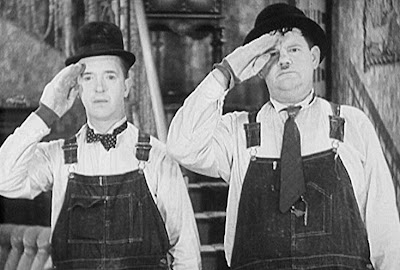 For those of us who stay behind and so wish we were there we salute you. And some of us are just a little jealous.
Chris

Fort TCM has arrived at the Roosevelt and it looks great. From the lobby to Club TCM and everything in between, the staff is busy at work putting the finishing touches on the event so everything will be in place.

Looks like a slightly bigger space for the boutique this year. The interview area is set up in the lobby and as of this afternoon there was still the plush seating available in the lobby as well.

Club TCM was under construction but it looks plusher and with more seating this year.

The front windows of the Roosevelt that look out on the Blvd and on Orange Drive all have TCM Festival posters in them and the rooftop marquee proclaims the Festival as does the Marquee of the interior Chinese theaters.

Hey, live streaming interviews have begun to show up on the TCM Festival Website. Robert Osborne is speaking with Charlie Tabesh, the programmer for TCM. RO is answering questions from TCM viewers. You can see it here:

Everyone cross your fingers. Tornados apparently are headed straight for Atlanta tonight. Hope they miss the airport and the train line that will take me there!
Top

It is slightly cooler today but poolside was filled with bathing beauties soaking up the 80 degree weather that the City of Angels has on display this week.

Met up with Suex2 after her stressful morning missing her connection in Phoenix, the lovely Cinemaven, VDOVault, Wouldbestar and the two other fashion plates of the festival (besides Suex2), Countessdelave and loveslilacs.

For a bit over three hours today they were shooting wraparound with Robert O and various guests including Dorothy Herrman, Diane Disney Miller, Barbara Rush (who looks more beautiful than you can imagine), Illena Douglas, Marnie Nixon and the legendary Mickey Rooney.

All will be airing on the channel during the festival so keep an eye out.

Had lunch with Suex2 and Cinemaven. Had a psychic TCM moment when Suex2 made a face and Charles Laughton was on the tv screen (all tvs at the Roosevelt seemed to be broadcasting TCM this week) making a similar face!

Can't wait to see more of you tomorrow!
Lynn in Lake Balboa

As soon as that panel is over (appr. 2:15-2:30) we will gather in the lobby of Fort TCM, actually the Roosevelt Hotel, and walk down to In-N-Out. We should be back in time for everyone to change into the finery for the evening's affairs!

See you in a few hours!
Lynn in Lake Balboa

UGH, the roosevelt has PCs now instead of Macs. Boo!

I'm going back to the lobby for a while and maybe I can spot you.

No idea where the burger place is.

These new Sony computers are AWFUL. No mouse -- all touchscreen, and I have to "touch" (really, bang with my finger) multiple times to make it go to wherever I want it to go.
Top

I'm out of the hospital now but read that you may be stranded in Atlanta by tornadoes. Georgia and other states were badly hit with them yesterday and many dead. So, I am happy to read you're in LA...

Have fun and a burger & diet coke for me - or whatever your favourite guilty pleasure is. A gooey piece of chocolate cake with caramel drizzle sounds good!! Or a caramel cake with chocolate drizzle would be nice too!!!!

If the members of the SSO gang don't mind, I'd like to see pictures of our group of members attending the Festival. I like "putting faces" on the people I like

Having a great time at the festival. Highlights so far: meeting Ed Faulkner at the Vanity Fair party (HUGE thank you to Sue Sue Applegate for making the introduction), seeing Peter O'Toole (I worship him) at the screening of Becket, and Vince Giordano and the Nighthawks accompanying Buster Keaton's The Cameraman. Jane Powell is as a gorgeous at 82 as she was back in her teens and twenties making classic Hollywood musicals.

The Roosevelt's new touchscreen computers are still awful. But that's the ONLY thing I can think of to complain about! TCM RULZ the world.
Top

Thanks for posting your comments about the Festival, Paula. I hope you're all having fun. I am relishing the thought of each of you attendees having this experience.
Avatar: Frank McHugh (1898-1981)

Did anyone meet Diane Baker?

RO interviewed her last night and she looked as if she might have just stepped out of Marnie! Her hair was slightly lighter, but she looked just great! What a wonderful person, I'd love to meet her if I were there.
Top
Post Reply
183 posts