You better break out a muffler and quilt, Bronxie. It's an all day Troy Donahue festival tomorrow night on TCM. I've never seen My Blood Runs Cold and since William Conrad (yes, "Cannon" himself) also directed a fascinating movie, Brainstorm (1965) around that time, I would like to catch this one. Is it really bad, Barbie? The synopsis is certainly intriguing!

Here are all the other Troylishious movies to devour on Thur., April 10th., starting at 8pm (ET):

Ah, Moira. Such great stuff available today. Susan Slade defines the Bad Movies You Love genre. I've never seen A Distant Trumpet, which is Raoul Walsh's last film. Perhaps directing Troy Donahue was such an honor that he decided nothing could top that?
Top

Moira, MY BLOOD RUNS COLD, along with A DISTANT TRUMPET (and I'm interested in the latter more for Raoul Walsh) are the two Merle movies I haven't yet seen. I'm excited about MBRC mainly because of Jeanette Nolan, one of my favorite character actresses. Nobody can do creepy old crones like Jeanette, so I'm hoping maybe she's a witch tormenting Troy and Joey. Heatherton's lower lip has always fascinated me -- it's got a life of its own.
Top

the two Merle movies I haven't yet seen

Didn't know you were a Haggard fan!

I might have seen SUSAN SLADE when I was a teenager. At the very least, the plot was similar to the description provided. But I'm sure there are a number of movies that boast that storyline! As for A SUMMER PLACE, just make sure Mickey Roarke does NOT have popcorn!
Top

I've seen about ten minutes worth of MY BLOOD RUNS COLD throughout the years, just enough to make me realize that when I watch it in its entirety tonight, I'm practically certain it will be a Bad Movie I Love, lol.
Top 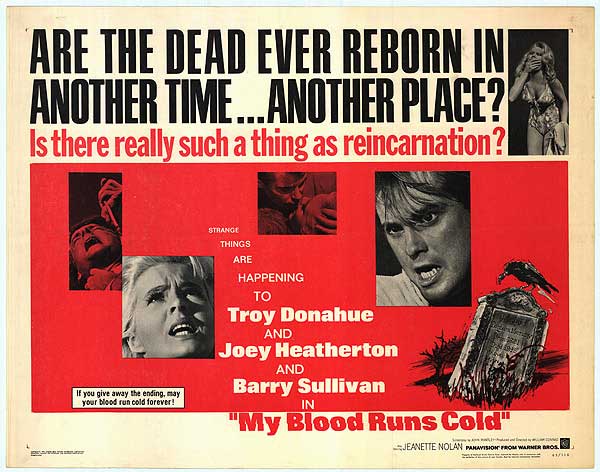 I'm going to give it a try! Thanks for the recommendations.

I'd love to see this! It looks wonderfully campy.
Top

I watched this movie the other day on TCM and this is actually one of my favorite Troy Donahue Movies because of the crazy antics in this movie and I often giggle of the swimming pool disaster in this film. I was surprised to see Andrew Duggan (who played the Sheriff in this movie) and Stephanie Powers (as her daughter) in this movie as well. Pretty good cast too. Jerry Van Dyke was sensational in this movie as Biff Roberts. Robert Conrad as Eric Dean was kind of shocker to see him in this movie ... anyway it's pretty much dated and I loved the photography of the lush desert scenes too.
Top

I'm afraid the sandman had a date with me last night but I did see that the assorted hipsters were headed for hellsville if they kept on in their wantonness and insolence. I wonder what Bing had to say about this particular film in his future bride's resume?
Avatar: Frank McHugh (1898-1981)

Bing crossed my mind too, moira, lol, especially during a scene where Kathryn as "Honey" is vacantly fondling an RCA Victor record before placing it on the turntable for a quick jazz fix in order to ignore a screaming Carol Ohmart. I bet this actually tipped the scales in favor of Grant for Crosby -- and that this is why he dumped Inger Stevens.

Never in my wildest dreams could I ever envision Nehemiah Persoff as a beatnik.

Did you watch MY BLOOD RUNS COLD? Would love to read your review. Jeanette Nolan's hair alone has more life than Troy Donahue.
Top

Yeah, Jeanette Nolan totally owned the movie whenever she appeared, garbed in some outlandish hairdo or wig (most of which showed up later worn by alien femme fatales on Star Trek) and swathed in something ritzy but incongruous. I'd love to have seen the budget breakdown on My Blood Runs Cold. Aside from the talent's pay, surely hair, makeup and costuming for Jeanette alone consumed most of the money. I figure that those great California coast locations were not captured on film in color due to a need to cut costs. Thanks, Jeanette!

I think My Blood Runs Cold was Nolan's revenge for having been cast in so many roles when she played women/chrones/hags in the old west who hadn't dragged a comb through her hair in a decade nor bathed since the end of the Civil War. It certainly made for a nice contrast to Joey Heatherton, who wore little more than a bikini and a pout in several scenes...to no avail...unless you're a guy, I guess. I felt sorry for Troy Donahue, especially in the scenes when he was supposed to be evincing haunted passion and those moments when he flopped around like a fish trying to convey some form of mental distress.


Never in my wildest dreams could I ever envision Nehemiah Persoff as a beatnik.

Yeah, that was a hoot but Nehemiah was not really convincing, was he? I also have a hard time picturing Anthony Quinn as a quasi-tragic hipster. If you have seen The Wild Party (1956) and The Happening (1967), don't they both seem like Tony's pathetic attempt to connect "with the youngsters?" It always seemed that Mr. Q. had a huge talent which only found expression a few times. The rest of the time, he was either playing Native Americans, Bandidos, or showing us a desperate actor performing in a craven manner to gain the short attention span of the allegedly hip. Kinda sad. Doesn't make me envy any actors, especially the mightily talented ones. They wind up looking like sliced ham when they try to shoehorn their skills into small-minded parts.
Avatar: Frank McHugh (1898-1981)

Interesting you mentioning fish in connection with Troy; I've always thought, and stated so, that Merle was really THE CREATURE FROM THE BLACK LAGOON, not Ricou Browning, lol. I mean, I swear Donahue looks just like him/it in the face. And in MY BLOOD RUNS COLD, he even talks to Joey about taking her to a sea cave! I WAS A TEENAGE AMPHIBIAN. Agree about Nolan -- she had a chance to look glamorous for once. Ironically, she even put Endora to shame, and Sam's mother was always a kookily stylish witch. Too bad Jeanette never got the chance to be on that show as one of the aunts like Enchantra or Hagatha -- they were usually decked out in fancy gowns.

I've just got to see THE HAPPENING. With a cast that includes Oscar Homolka and Milton Berle, who could resist? Missed FLAP, blast it!

I've never seen Tony's performance in VIVA ZAPATA but he totally deserved it with LUST FOR LIFE as Paul Gauguin. I recorded THE NAKED STREET, can't wait to get to this -- Farley Granger supposedly playing against type. And I'm sure that with a young Anne Bancroft as Tony's sister, there will probably be a lot of yelling and the eating of either lasagna or maybe cabbage rolls depending on the family's "ethnicity".

Yes, Quinn as hipster just doesn't compute with me. Did you see A WALK IN THE SPRING RAIN? Although he fits into the "farmer" role, I can't think of a less likely trio than Tony, Ingrid Bergman, and Fritz Weaver plunked down and going through Life Changes in The Smoky Mountains. Quinn with a Southern accent, not too authentic. And I can never tear myself away from Fritz Weaver's facial mole. Like Joey Heatherton's lower lip, it definitely has a life of its own.
Last edited by Bronxgirl48 on May 2nd, 2015, 12:11 pm, edited 3 times in total.
Top

My Blood Runs Cold ... sounds like an interesting movie!
Top

Erik, as a Rita Hayworth fan you have impeccable taste so I don't know how you'll manage to sit through Joey Heatherton (and Troy) trying to act or exude personality in MY BLOOD RUNS COLD. But it's good for minor camp value. (not in the same league, however, as, say, THE WILD PARTY, lol)

TWO ON A GUILLOTINE next week!
Top
Post Reply
906 posts