Was C. Aubrey Smith born with that moustache?
Top

Was C. Aubrey Smith born with that moustache?

Donald Crisp was a superb actor. Especially in HOW GREEN WAS MY VALLEY, but in other films too.
Top

Davenport perfectly looks the part of a turn of the century academic.
Top

Moira, these pictures are just wonderful. I knew that Cathleen Nesbitt and Gladys Cooper were considered great beauties in their youth, and it's easy to see why. Wouldn't a lot of actresses like to have lips like Henry Hull? C. Aubrey Smith looks pretty darn good in his cricket whites. So these people weren't born at age 79!
Top

. . . NOt when he was THE WEREWOLF OF LONDON

To interrupt the merriment for a moment, tonight is the night for Khartoum and Zulu Dawn. I will also record Sanders of the River, which apparently has sterotypical portrayals of some of the natives, but darn it, there aren't many opportunities to see Nina Mae McKinney.

Again, those pictures of people who seem to be "born old" are amazing. And Louis Calhern was married to Natalie Schaefer?
Top

Did he call her Lovey?
Top

How do you feel about actress Laraine Day? I like her though I am not sure why. The lovely eyes? The warmth in her voice? The kindly if curiously bland manner? The way she wore her hat? Does it matter? She's just nice (even when she's bad). 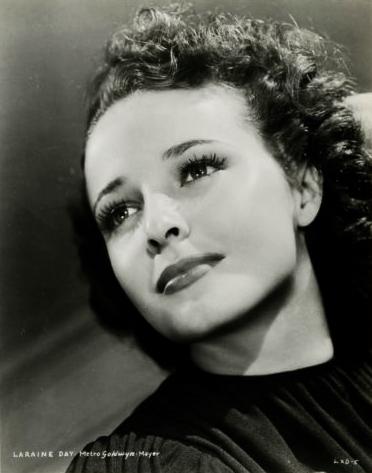 Monday is Laraine Day's Birthday. In honor of this, TCM is airing many of her B films, listed below, along with a few of her A pictures too. Too bad The Locket, her best film dramatically, was shown once earlier this month and one of her most memorable, Foreign Correspondent, is being aired on Sun., Oct. 19th at 5:45pm (ET). Her appearances opposite Lew Ayres in the Dr. Kildare series are being aired this month with her final appearance as Nurse Lamont coming up this Sat., Oct. 18th in Dr. Kildare's Crisis (1941)--bring your hankies for this one.

On Monday, TCM is showing her last co-starring film with Ayres, Fingers at the Window, which the pair made together at MGM just before Lew filed for C.O. status and got the public heave-ho from the studio. (The movie is good fun with Lew and her as an unlikely couple and a certain Mr. Rathbone along for the jaunt).

If anyone has seen these movies being shown on Monday and has an opinion, I hope you'll share it here. I am especially curious about A Yank on the Burma Road (Barry Nelson, war god?!) and Unholy Partners (Eddie vs. Eddie?). It has been about two decades since I last clapped eyes on Tycoon, but I do remember John Wayne building a dam, getting p.o.ed a great deal, and Laraine being restricted from personal expression by her dad (Cedric Hardwicke, if you can believe that miracle of genetics) while his sister Judith Anderson acts as duenna. :

6:00 AM
The Painted Desert (1938)
A cowboy and a bandit face off over possession of a valuable mine.
Dir: David Howard Cast: George O'Brien , Laraine Johnson (Later Laraine Day), Ray Whitley .
BW-59 mins, CC,

I know who should be weighing in on this when she reads this. Thanxx for spotlighting Laraine Day, Moira.
"You build my gallows high, baby."

Great additions to the "born old" list, guys! Thanks for the input.

Wow, I didn't recognize Harry Davenport. And Eugene Pallette as a baby looked more like he would as an adult than the photo of him as young man, lol. Paul Fix got better looking as he aged, whereas Lloyd Nolan (awww, so adorable there) became more rabbity. Thanks moira!
Top

Smile when you say that.

My old pal Lloyd played a lot of underworld types but I don't think he ever played a character nicknamed "Bugs".