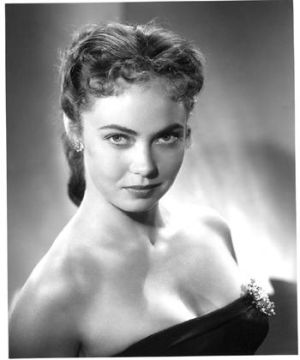 That photo at the Chinese Theatre would been a better photo if CHARLES BOYER hadn't smoking a cigarette then. That's a legendary photograph of all the major players on TALES OF MANHATTAN ... a 1942 Anthology Film.

I also loved the HAT that Rita Hayworth was wearing ... she wore that hat in YOU WERE NEVER LOVELIER (another 1942 Film) with Fred Astaire and Company.

With Fred Astaire and Adolphe Menjou in YOU WERE NEVER LOVELIER

Joe, my heart melted at that photo of Jeanne Crain.

Here a pic of Cannes 2014 Best actress award winner, JULIANNE MOORE, who once was a terrific and brilliant Cathy Withaker in the remake
of ALL THAT HEAVEN ALLOWS, 1955, FAR FROM HEAVEN,2002, where she gave lifetime performance.
In Cannes , whe was awarded yesterday, for a DAvid Cronenberg film, MAPS TO THE STARS, a cruel,diting story about...HOLLYWOOD!
Doesn't she look like a forties-fifties movie star on this pic?
Congratulations , JULIANNE!!

I know just what you mean, Stone.
Joseph Goodheart
Top

Swarms of admiring sailors press in to shake the hand of Gene Tierney. July, 1944