Making lists, one of my favorite things to do!

William Powell – he was just so suave, charming and funny; like Gary he never really gave a bad performance

Don Knotts – just looking at him cracks me up. He’s just one of those guys who doesn’t have to try hard to be funny; he just is (or was).

Mike Nelson (host of MST3K tv show) – like Don Knotts, practically everything he does just cracks me up

Charles Farrell – was better in silents than in talkies although he does have some really good talkie performances like in After Tomorrow. I just love his sweet boy next door image and he reminds me a little of Gary so there you go

Those are my top faves and the rest include both lead and supporting actors.

I also have to throw in Ray Milland and Gene Kelly (okay so that’s 27).
“I never really thought of myself as an actor. But I’d learned to ride on my dad’s ranch and I could do some roping stunts and working as an extra was better than starving as an artist nobody wanted on the West Coast.” - Gary Cooper
Top

coopsgirl wrote:Making lists, one of my favorite things to do!

Don Knotts – just looking at him cracks me up. He’s just one of those guys who doesn’t have to try hard to be funny; he just is (or was).


I also have to throw in Ray Milland and Gene Kelly (okay so that’s 27).

I expected Number One but I didn't expect Don to be practically right next to him!
I love to see the funny people on these lists---making people laugh
and forget their troubles is one of the GREATEST gifts of all.

I've said this a thousand times before, but Mayberry just lost all
it's "color" (even though it went to color right after) when Barney
left.
"There's only one thing that can kill the movies, and that's education."
-- Will Rogers

How can you not see the similarities between these two? 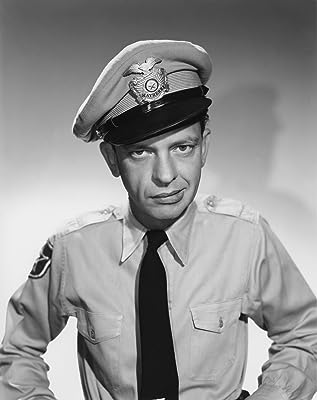 I’ve been watching reruns of The Andy Griffith Show since I was a kid and they always make me laugh (except for one of their Christmas episodes that makes me cry like a baby). I have the first three seasons on dvd and I put seasons 4 and 5 (Knott’s left after season 5 so this will complete my collection) on my wish list for Santa. I totally agree about the Barney-less eps and it’s funny b/c there are two camps in my family; those of us that like the color eps and those that don’t.

There’s an episode in their first season (’60-’61) where Barney is telling Andy about one of his friends who went on a trip to California and while he was on one of those buses that takes you around to the star’s homes, they got out in front of Gary’s house and talked to his maid who was standing out there. It cracked me up b/c Barney said something like “he got to stand on Gary Cooper’s lawn and talk to Gary Cooper’s maid.”

This one aired early in the season when Gary was still alive and I thought it was neat how much a part of pop culture he was right up to the very end. They also have another ep in one of the first few seasons called ‘High Noon in Mayberry’ where a guy that Andy arrested a few years ago just got out of prison and he’s coming back to see him. Barney is just freaking out and trying to convince Andy to get out of town but he refuses to go. In the end Andy faces him and the guy turns out to have been rehabilitated in prison and he actually wanted to thank Andy for arresting him.

I kinda see Deputy Fife as all the regular guys out there who wanted to be like Gary's characters in the movies. They wanted to be good with the ladies, quick on the draw, and always ready for whatever challenges maybe coming their way. Barney may have been scared a lot of times, but he always ended up doing the right thing and standing up to the bad guys

He was quite a hit with the ladies too “I never really thought of myself as an actor. But I’d learned to ride on my dad’s ranch and I could do some roping stunts and working as an extra was better than starving as an artist nobody wanted on the West Coast.” - Gary Cooper
Top

Good ol' Don "Barney Fife" Knotts still provides instant laughter whenever Dad and I are together because at some point one of us will quote him:

Now, here at The Rock, we have two rules. First rule: Obey all rules.

A genius of timing and mugging.
Everyday people...that's what's wrong with the world. -- Morgan Morgan
I love movies. But don't get me wrong. I hate Hollywood. -- Orson Welles
Movies can only go forward in spite of the motion picture industry. -- Orson Welles
Top

They are easy to tell apart. Cooper is at least two inches taller.
Chris

“I never really thought of myself as an actor. But I’d learned to ride on my dad’s ranch and I could do some roping stunts and working as an extra was better than starving as an artist nobody wanted on the West Coast.” - Gary Cooper
Top

I am crazy about lists, too. Fun idea MG.

MichiganJ wrote:Jeff Bridges--C’mon? The Dude! From Last Picture Show to The Amateurs, Bridges is always brilliant. Fisher King? The Contender? Baker Boys? Do I have to mention Lebowski? Check out the under appreciated Tucker. Even the abysmal De Laurentis King Kong is worth seeing for Bridges (if not for Jessica Lange’s immortal line “Put me down, you chauvinist-pig ape!”)

Don't forget Starman. He was brilliant as the alien who inhabits an earthling's body.


MichiganJ wrote:Paul Newman--Two words: The Verdict. Newman was brilliant as a star, but I loved him as much in the character roles. Does anybody else love The Hudsucker Proxy like I do?

I remember enjoying Hudsucker, but didn't remember that Paul Newman was in it! Guess it's time to watch this again.


MichiganJ wrote:Steve Buscemi--Great actor, especially in the Coen brother films (Fargo), but he’s equally great in the goofy, but fun Con Air. Check him out in Ghost World.

You're so right, he was great in Ghost World. I'd add Mystery Train to his list too.


MichiganJ wrote:Kevin Kline--He’s great in Dave and my wife loves him in French Kiss, but it’s his turn in Fish Called Wanda, that seals the deal. Silverado, too (I love that film). Oh yea, The Ice Storm, and of course, Big Chill

1. Daniel Day Lewis - the chameleon. I first saw him in two movies back-to-back: My Beautiful Launderette and Room with a View. I couldn't believe he was the same actor. The Zeus of acting.
2. Cary Grant - possessed an amazing range; made acting seem effortless. Pair him with Irene Dunne and I'm a happy man.
3. Gregory Peck - the voice, the depth, his performances restore me.
4. Marcello Mastroianni - The aching romance of Le Notti Bianchi, the self-doubting Guido in 8 1/2, His later work in Oci ciornie ("Dark Eyes") and his work with Sophia Loren Una Giornata particolare.
5. Jean-Louis Barrault - could transform himself to be an allegorical figure of human emotion; heartbreak, sensitivity, elation.

Hi Moraldo---this is definitely a request for "favorites", so by all means keep Eric Blore on your list.

Thank you to all who've contributed, those that havent, keep them coming!
"There's only one thing that can kill the movies, and that's education."
-- Will Rogers

I'm glad you stated this to be a list of 'favorites' rather than bests because I have a couple on my list that are definitely favorites and far from best, but I love them anyway. Getting peoples opinions on different stars is very interesting, especially the foreign ones. I have no idea who they are, so I look them up for a photo on imdB. Sometimes I recognize them, other times they are not listed, but not being a fan of foreign language films, I have no way of forming an opinion. I'm just glad for movies like The Longest Day, and others with an international cast where I can get a snippet of their work.