In the past month, I've been enjoying Esther Williams TCM Spotlight Star ... films like "Million Dollar Mermaid", "Neptune Daughter", and others. She is incredibly beautiful ... and has a very pleasant and lovely screen presence.

I'm really surprised to see that there isn't a thread devoted on her. I even did a search ... she is mentioned a lot in Musicals, What's Films that you've seen lately, and MongoII's thread - "CANDIDS" that we all like so much.

For what I remember of what my Uncles and Grandfathers told me about her ... that she was a competitive swimmer, a MGM Musical and Film Star from the mid-1940's to end of 1950's. My Dad, doesn't care much about her ... he wasn't much a movie fan like me and he's quite picky in terms of movies. He's can't even spend 2 hours sitting down and watching a movie. But, can spend 2 hours watching his favorite programs on network television.

My Grandfather on my Mom's side of the house told me all about her and she was one of his favorite actresses and the reason for this thread is I would like everyone here to share your thoughts about her.

My first impressions of her ... is she has a very commanding presence on screen, very photogenic, charming, and most of all has a knack of entertaining you on a grand scale. MGM knows how to put on a spectacle. When, I first saw the "Million Dollar Mermaid" for the 1st time I was in awe of the TECHNICOLOR aspects, the LAVISH sets, and the IMAGERY of the whole production that went into it. This is my first impression of the "Million Dollar Mermaid". Now, I just saw "Neptune Daughter" today this morning and again ... this was another beauty too. Its has the dashing young Ricardo Montalbán and other great stars as well. Again, I was entertained again ...

Scenes from Neptune Daughter's that I seen today 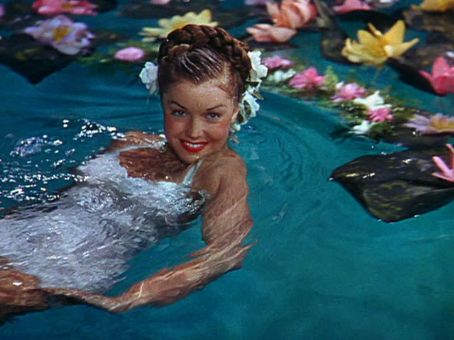 So, everyone ... now it's your turn to share your thoughts about Esther Williams ... to me ... she's a very unique entertainer that can do Musicals, Comedies, and some Dramas as well.
Top

I like Esther's films for their Entertainment Value and for her beauty & charm. When I travelled to the States for Xmas & New Year, I bought The Esther Williams Collection Vol. 2 and I've already watched "Fiesta" (1947) and "This Time for Keeps" (1947), both of which I reviewed on the What Musicals have you seen? Thread. I also revisited a few months ago the incredibly entertaining "Bathing Beauty" (1944) and "Neptune's Daughter" (1949). Given all the praise I've read in relation to "Million Dollar Mermaid" (1952) I'll try to watch it soon.

When I was a kid Esther's films -which were aired on Local TV dubbed in Spanish- brought much happiness in a rather sad & lonely childhood and I was thrilled to listen to my grandmother's husband's stories when he met her and other Hollywood Stars in Buenos Aires during the 1940s (he was a Commercial Pilot).

By the way Kingme, do you know that the original outfit that Rita is wearing in you avatar is in Chile? It belongs to the Millionaire Jorge Yarur who has opened a "Museo de la Moda" in Santiago (a Fashion Museum) and I saw it once on display, in one of its exhibitions.
Top

feaito wrote:By the way Kingme, do you know that the original outfit that Rita is wearing in you avatar is in Chile? It belongs to the Millionaire Jorge Yarur who has opened a "Museo de la Moda" in Santiago (a Fashion Museum) and I saw it once on display, in one of its exhibitions.

Hey, I did not know that! Feaito, thanks for telling me all about this! I wish I could seen it. I just read your post. Nicely Written and I learned more about her ... nicely put!
Top

Kingme, I had no intention of watching Dangerous When Wet the other night, but after the first few minutes, I was hooked. Esther swimming with Tom and Jerry, Charlotte Greenwood doing some of her famous high kicks, Fernando Lamas as the handsome love interest. What's not to like?
Top

In my opinion, Dangerous When Wet is one of Esther's most entertaining films.
Top

feaito wrote:In my opinion, Dangerous When Wet is one of Esther's most entertaining films.

kingrat wrote:Kingme, I had no intention of watching Dangerous When Wet the other night, but after the first few minutes, I was hooked. Esther swimming with Tom and Jerry, Charlotte Greenwood doing some of her famous high kicks, Fernando Lamas as the handsome love interest. What's not to like?

I will be watching that movie tonight ... I recorded on my DVR Machine and I wanted to say to both of you (feaito & kingrat) for your vote of confidence. I will give you my review after I watch it. 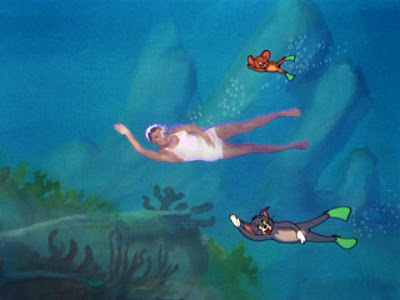 This is pretty unusual Esther Williams film ... combination of live action and animation in one film. Very Clever and Very Entertaining ... I will be getting this film from TCM in the next 5-10 days from now ... and I certainty enjoyed it immensely.

Good all around entertainment, nice romance ring to it, and nicely paced. Good film for the whole family.

.
I grew up just loving Esther Williams and was proud as a peacock the day I was able to afford a bathing suit from her line. My favorite leading man for her is Howard Keel, mainly because she is a large, muscled girl and her physique fits hits better than any of her other leading men, but I love how sweet she is with Red Skelton in their movies together. Like Rita Hayworth and Susan Hayward, the reddish streaks in Esther's hair make her complexion stand out beautifully in technicolor. I can't imagine her in B & W. Like Sonia Henie, the other totally unique actress of her own era, with ice skating, nobody even attempted to challenge Esther's throne as indisputable swimming champion of the movies.

If you really think about it, the lady had it all, she was beautiful, she could sing, dance do comedy and drama as well, and on top of it all, she could swim like a mermaid. Her movies are pure entertainment, never asking to teach the truths of the world, nor asking for your understanding of her movies hidden agendas. For me, that is true moviedom - - to be entertained, you can go to school to learn.
.
Anne

I own all these pictures ... of her! She is simply a glamorous lady that entertains you like no other ... Very unique and wonderful too.

The top photograph is a promotional photograph of her in the MILLION DOLLAR MERMAID.

My personal all time favorite of her ...

So glamorous in these two photographs of her wearing a black peignoir gown ... so enchanting!

Although I enjoy the Esther Williams swim films there is one thing that annoyed me about the mermaid. No doubt that she was a charming woman.
At one time she dated Jeff Chandler and when she wrote her book she exposed him to the world as a cross dresser. I felt that this info should have remained under wraps especially since Chandler's daughters and grandchildren were alive to read about it. It was a shameful expose, if you ask me.
Joseph Goodheart
Top
Post Reply
21 posts