I must confess that when I heard of the death of Esther Williams on the news last night I wept. One seems to think of film stars staying as they are on the screen, and not aging. I have 24 of her 25 movies, and I still find it hard to believe that a woman can be so beautiful.
I recall her first movie, when she looked so out of place as Mickey Rooney`s love interest. (Esther at 5’8 1/2” with a swimmer`s broad shoulders and Mickey at 5’2”). What a difference when she appeared in colour movies with actors like Van Johnson and Howard keel.
Top

I am an absolute fan of Esther Williams. I do own most of her movies and enjoyed them all. As I got older, though, I became impatient watching some of the "fill" burlesque acts inserted in her films. Modern films usually have more story content and less nonsense comedians. But I do agree that Esther Williams is one of the most beautiful woman to grace Hollywood. Her beauty was warm and attracted just about everyone who saw her. Don't forget she also became quite the successful business woman with her swimsuit lines and she also put her name on some swimming pools. She was married four times and had three children. The most notable of her marriages was to Fernando Lamas which lasted until he died. All of her children were from her second husband Ben Gage who was a singer and actor. They divorced.
Uncle Stevie

I re-watched NEPTUNE DAUGHTER on TCM this bright and early Sunday Morning - because I just wanted to see this charming musical, drama, comedy, and a charming movie that featured the very lovely ESTHER WILLIAMS - and the debonair of RICARDO MONTALBAN and dandiness of a comedic duo of RED SKELTON and BETTY GARRETT.

Not to mention the good supporting cast of KEENAN WYNN, XAVIER CUGAT, and MEL BLANC who played Pancho.

It was a delightful film and wonderfully done back in 1949.

One of my favorite scenes in this movie ...
[youtube]http://www.youtube.com/watch?v=7MFJ7ie_yGU[/youtube]
Top

One of my prized picture of Esther in my Collection

One of my favorite Esther Williams of which she co-starred Fernando Lamas her future husband in this charming musical of which she starred with a family of fitness freaks and one of things I like about this movie is three things ...

1) Her Segment with Tom and Jerry 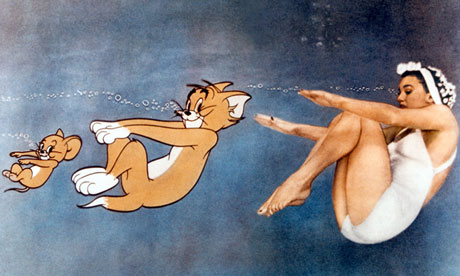 2) Her Swim across the English Channel

3) Her dealings with Mr. Lamas

I'm glad that I had a chance to watch this charming musical today and was greatly entertained by it.
Top

Here is a couple more from my Collection ...