I watched DEAD RECKONING again recently. I like that "second tier crime classic." There are half a dozen members of the genre that are so good the others tend to be overlooked. This is no MALTESE FALCON. No OUT OF THE PAST. But it's exciting, well paced and satisfying. I'm pretty sure I said this before. But I don't think it was on this thread.
Top

I agree Red, It's not a great noir, but a good one. Stand out scenes for me are the aforementioned one with Mike the Bartender (played by Charles Jordan) and the scene in the morgue with the nasty cop. That guy could have been auditioning for Emile Meyer's role in Sweet Smell of Success, he was so repugnant.
Top

Here's an absolutely wonderful article about Sterling Holloway for the blog, Sittin' on a Backyard Fence. It's part of the What a Character! Blog-a-thon going on through November, celebrating our favorite character actors :

Voicing one of his first roles for Disney, Mr. Stork in Dumbo

With Imogene Coca in Broadway's Garrick Gaieties of 1930
Top

For more information on the What a Character! Blog-a-thon, please use this link as a jumping off point:

I like him as the crackpot inventor on SUPERMAN. A stamp that's fun to lick? "It tastes like vegetable soup!" Isn't he on a DICK VAN DYKE? I can't believe I don't remember this!
Top

STERLING HOLLOWAY is pretty much a bona fide character actor that I love ... and he been on so many Disney Movies it's mind boggling that done for voice characterization. I loved him as a FIRE CHIEF in Mad, Mad, Mad, Mad World ... Adventures of Superman - he was a hoot as Professor Twiddle.

He was the Frog in Alice in Wonderland back in 1933. Something very few people ever noticed of him. And, at Casey at Bat back in 1927 ... I remembered seeing him in that movie in Victoria Canada back in early 90's and he puts on a memorable show as a character named Putman.
Top

Oh my gosh, I think he was on Batman or something red... you are jogging my memory banks... oh, heck, he was probably on EVERYTHING, at one point or another.

I'd be really curious to hear your opinions on ~Casey at the Bat, Erik, since this is a very rare film only available in one 16 mm copy. It's only been shown once in the last 20 years at a film festival in 1994... can you tell me more about it? What exactly did you like about it and what was Sterling Holloway's role like? What are your thoughts on the movie? Who did you like best and how did they stretch the story out?
Top

Rita Hayworth, I can't believe you remember Professor Twiddle by name! CASEY AT THE BAT? Fascinating! I don't know this story at all. Is it silent?
Top

JackFavell wrote:
I'd be really curious to hear your opinions on ~Casey at the Bat, Erik, since this is a very rare film only available in one 16 mm copy. It's only been shown once in the last 20 years at a film festival in 1994... can you tell me more about it? What exactly did you like about it and what was Sterling Holloway's role like? What are your thoughts on the movie? Who did you like best and how did they stretch the story out?


CASEY AT BAT was a Silent Movie Starring WALLACE BERRY as CASEY and its was a very delightful movie to watch and I enjoyed it very much and STERLING HOLLOWAY played a character by a named of Elmer Putnam and he was very delightful character. The problem is that I vaguely remember this movie because I was in Victoria at the time when it was shown at a hole in a wall movie theatre that was torn down to make room for a shopping center and I wished that I could share more. But his performance was charming, very eloquent one and it was a somewhat a musical of sorts ... This silent movie was 60 minutes long - and its was part DRAMA, MUSICAL, COMEDY, and STAGE - so it was a mixture of all four movie genre.

I do remember it was somewhat stretch out and they did follow the POEM quite well - if I recall correctly.

That's all I can remember - I wished I could share more ... 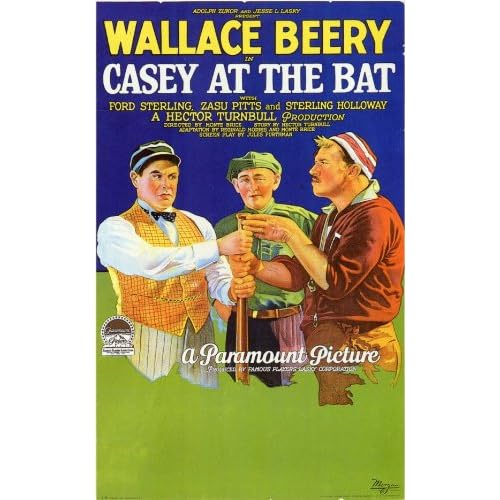 RedRiver wrote:Rita Hayworth, I can't believe you remember Professor Twiddle by name! CASEY AT THE BAT? Fascinating! I don't know this story at all. Is it silent?


Red River ... I do have the COMPLETE SERIES OF SUPERMAN and he was a frequent guest star on that program. CASEY AT BAT was a silent movie ... 60 minutes in all.
Top

Did they have some kind of accompaniment, Erik? You say it was a musical, but that it was a silent picture? I'm confused. Was there a score, or a soundtrack?
Top

JackFavell wrote:Did they have some kind of accompaniment, Erik? You say it was a musical, but that it was a silent picture? I'm confused. Was there a score, or a soundtrack?

Sorry, my mind was on something else and I was rattling my brains out - and at the same time waiting for my flight back home from Vancouver B.C. - I was informed that I will be on the next flight ...

The movie CASEY AT BAT was a SILENT MOVIE and it was a COMEDY no more. It was pure comedy and with some DRAMA and STAGE built in. I don't recall any music at all. And, it wasn't a MUSICAL at all. My bad. I feel sorry to mislead you both Jack Favell and Red River.

I don't recall any score and soundtrack at all.
Top

Of course! In some of the illustrations, one of the ball players even looks like Sterling Holloway!
Top

I was watching Alfred Hitchcock Presents last night, and saw this actor who I have picked out of the crowd every time I've ever seen him, in movies or on TV.

The sad eyed, weary looking actor appeared on TV over 200 times, and made 29 feature films. Whenever he shows up, I end up watching only him, there's just something magnetic about him that catches my eye. I know I've looked up his name several times, trying to remember 'who IS that actor?' I think my first instance of asking myself 'Who IS that?' happened during a viewing of The Brothers Karamazov, where he managed to take my attention away from Yul Brynner for a few minutes... no small feat.

Sorry, no photos and no videos of Townes' performance were available.

My next meeting with Townes was in the Glenn Ford movie, Heaven With a Gun, and then on an episode of Wanted: Dead or Alive.

A southern boy from Huntsville, Alabama, he went into acting right off, getting experience in drama club presentations during his college tenure at University of Alabama and at Columbia University.

(forgive the logo printed across the front of the picture)

He seems to have had little trouble landing Broadway and stage roles immediately, playing Captain Tim in an early revival of Tobacco Road, and also was the replacement Og in the original run of Finian's Rainbow. He toured with the show for two years, going to London to play the part there as well. Not sure if that means he understudied David Wayne? it seems a likely fit though.

Townes took 4 years off just before Finian to fight in WWII as a member of the Army Air Corps. In 1946, he went right back into acting, and soon went to Hollywood, appearing in 29 movies during the course of his career.

In the fifties and sixties Harry Townes became one of the most recognizable faces on TV appearing on countless shows, most notably Perry Mason, on which he appeared 5 times, and The Fugitive, which he also appeared in 5 times.

He took roles in everything from westerns to science fiction:

His most popular appearance on TV was on The Incredible Hulk, in an episode entitled, The First. Townes played an earlier victim of 'hulk' like symptoms. The Hulk story was very similar to a Twilight Zone episode he did called The Four of Us Are Dying, in which a man is able to change his face in order to run away with the woman he loved. In both shows, the man is attacked by her other suitor, and in fleeing changes into another form. Ironically, he is shot escaping, because he's 'different'.

In the 1970's, Townes quit acting, moved away from Beverly Hills, put himself through seminary and was ordained as an Episcopal priest. He first served at the Church of the Bells in Palm Springs, CA. then moved back to Huntsville, pastoring there until his death in 2001.

I guess we're never entirely happy with what we do; we would like to do better. I feel I was lucky to get the work that I did. You always feel thankful because there are so many actors for so few jobs that it seems God is being good to you when you get a job. Of course, I would have loved to have done better, we all would. But we always think we can do it better in one more take. On the whole, I'm satisfied, though. As long as the audience was satisfied, then I'm satisfied.

Thanks for this profile of a wonderful actor. I'm so glad he had such a full life and didn't hang out in LA waiting for parts. That "hanging on" fate seemed to catch up with most of the very good actors who were left behind by Hollywood's chronic amnesia, esp. beginning in the '70s.
Avatar: Frank McHugh (1898-1981)