How Green Was My Valley

How Green Was My Valley

Another John Ford Classic with many memorable performances.

This is a film I love. Primarily I enjoy it for Donald Crisp's performance. He rules with an iron fist and a warm heart. The family structure precedes what will follow in the Cavalry pictures.

My favorite scene (at least one of them) is when after Crisp has the blow up with his sons the only one left is Roddy McDowell who loudly drops his knife on his plate. Crisp responds by teliing he knows he's there. A touching moment.
Chris

A favorite of mine for many years. One of John Ford's best films.

There has been a tendency to downgrade "How Green Was My Valley" recently because it beat out Citizen Kane for Best Picture of 1941. It turned out to be John Ford's only win in that department. Because Citizen Kane now is lauded as the best film EVER, "How Green Was My Valley" lost a bit of luster. Yet on its own merits it's a fine film and can be seen again and again without any boredom.

That it was made on a fairly limited budget and filmed entirely on the 20th Century back lot is little short of amazing. Its truly great, sprawling set seems to be the real thing: an actual coal mining town.

It is magnificently staged and shot, with a lovely score (by Alfred Newman) and rich performances, headed by Walter Pidgeon, Maureen O'Hara, Donald Crisp and Roddy McDowall. Not to forget the sterling performance by Sara Allgood as the matriarch of the Morgan family.

"How Green Was My Valley" is a fine achievement, now gloriously restored to dvd for many future viewers to enjoy.
Joseph Goodheart
Top

Ah, now you've touched on my favorite JF film and one I can watch over and over without tiring. I am in constant admiration of Sara Allgood's fiercely protective matriarch as well as the way John Ford has of looking at the most proper subject of storytelling: humanity itself. What is best, worst, comical, daft, criminal, petty, sublime, self-righteous and wry is mined in character after character. I admire aspects of Citizen Kane, but I love HGWMV. 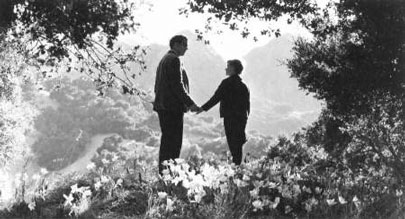 It's on Dec. 11. Geez, Maureen looks good in a wedding dress.
Chris

The only bad movie is no movie at all.
Top

This will be a premiere for TCM of this Fox pride and joy.
Top

I recently saw a little promo with Maureen (date unknown) where they talked about the wedding veil and the way is flowed so wonderfully as she came down the stairs. She says people always thought that was the Ford luck. She said luck had nothing to do with it. When they shot he had a wind machine set up to do exactly what it did.

I agree with you about Roddy's performance. He seems so much to be the normal kid. He's respectful of his parents, eager to please and loves his family. (Maybe that 's the way we want kids to be. BTW, no problems with my own.) Kind hearted yet determined to measure up to his brothers.
Chris

How Green Was My Valley is simply my favorite movie. I can't watch it with being awash in memories of first seeing it with my parents as a kid, but every time I see it now, something new and more deeply beautiful about the movie strikes me visually or in the story or characterizations.

I suppose that's indicative of the eternal quality of the story, which is about the ties that bind us forever and the inevitable dissolution of every family that occurs within each generation. Of course, John Ford's poetic understanding of all this informs every frame of the film, but what a magnificent example of the work that could be achieved in the studio system--Arthur Miller's cinematography, the remarkable, lived in setting of the mining village created by anonymous craftsmen under the guiding hand of Art Directors Richard Day, Nathan Juran & Thomas Little, Alfred Newman's music, and that beautifully condensed script by Philip Dunne of Richard Llewelyn's novel--jeez, has there ever been a more fascinating collaborative art than moviemaking?

It's so great to see the appreciations for Donald Crisp and Roddy McDowell here but there are also some of Sara Allgood's best moments on film in HGWMV. One of them is when Huw (Roddy McDowell) is looking at the map of the world with his father (Donald Crisp), discussing all the far flung places that his older brothers have gone to and commenting how far away they are. Allgood says a little brusquely, no, they aren't far away, but are all there in the house still.

I think that this heartbreakingly true moment is evocative of one that Ford shot more visually with mother figures Margaret Mann and Eugenie Leontovich in the '28 and '40 versions of Four Sons. It seems to work best when it is played in HGWMV, however.

What does anyone think of Walter Pidgeon's character? I've always been intrigued by his blend of longing, decency and frustration.
I think that commentators now have a hard time understanding a character whose commitment to his priniciples is as strong as his love for this woman, (especially since it's the beautiful Ms. O'Hara!). I wonder if this aspect of the story might only be understandable to some if seen as from another time, when people were less likely to act on their feelings.

Of course, the beautiful scene when he arrives home to find Maureen O'Hara waiting for him and he has to force himself to send her away is another memorable moment too. I think it may be Pidgeon's best work, even better than Man Hunt and Dark Command..

I so enjoyed reading your comments on this piece of poetic cinema, Moira. And thank you for hailing Sara Allgood's characterization for hers is one of my very favorite characters in any movie. She does so much with just a few lines and pungent scenes. I admire her fierceness on behalf of her family.

While I find something puzzlingly ambivelent in the performance or style of Walter Pigeon in this movie, I do understand his motivations, even if I pity him. His is the character that most turns up in my favorite Ford films, the lonely, driven character that causes me to be so attached to the work of this director. My favorite scene is just that long shot of him standing on the hill after Maureen stoically floats by in her bridal splendor.
Top

moirafinnie wrote:
What does anyone think of Walter Pidgeon's character? I've always been intrigued by his blend of longing, decency and frustration.
I think that commentators now have a hard time understanding a character whose commitment to his priniciples is as strong as his love for this woman, (especially since it's the beautiful Ms. O'Hara!). I wonder if this aspect of the story might only be understandable to some if seen as from another time, when people were less likely to act on their feelings.

I hadn't thought about it until you brought it up but Pidgeon's character does indeed honor his vow. He sees a higher calling that he must follow and his personal wants and needs can not get in the way. It's too bad as it leaves two unhappy people where any other time would be.

I love it when he jumps all over the congregation for their attitude about Angharad. I think he does as much for his love of her as he does for calling out Christians (as is his job) when they are being particularly un-Christian.

It's been forever since I've seen "Man-Hunt" but I would put this above "Dark Command."

Sara Allgood looks like a mother that's had a half dozen kids. She is everything matronly, right down to the size of her waist. It is heart breaking to watch her as her sons leave the house. Such a love she has for her children.
Chris

It's so hard to believe that this was filmed on a back lot and not Wales. The sets where great and the smoke coming out of the Chimneys and mines, had me gagging. No wonder by 40yrs. you were considered old. Besides Donald Crisp I loved Sara Allgood as the Mom (she reminded my of my Irish grandma)

Bill
"We're all forgotten sooner or later. But not films. That's all the memorial we should need or hope for."
-Burt Lancaster
Top

I'm glad they decided not to lengthen this movie as originally planned. By ending it the way they did, Roddy McDowell remains in memory as the lead character which is as it should be. He was a darn good little actor and deserves to have this film as a testament to his memory.

As for O'Hara's veil, I believe she said it took loads of takes before Ford finally got the 'look' he wanted. I think she said she was exhausted going up and down that slope for every take, and the fans dried up her eyes.

How Green Was My Valley is a great film. Unfortunately, it is not as well known these days as the film that didn't win, Citizen Kane.

However, I find the two films evenly matched and if a recount was called by today's viewers (who had the opportunity to view both films) I think How Green would definitely win again.

An interesting thing that Peter Bogdanovich noted, was how similar both films actually are. Both films are about the dissolution of the family unit, but use different styles to interpet what family is. Bogdanovich states "Kane is about the affluent and powerful while Green is about everybody else."

But there's also a difference in outlook. Green although tragic, has the perserverance of the human spirit behind it. In Kane, all the possessions lie waiting for the furnace. We know from Huw's experiences (learning to walk, working in the mine) that he will start over and rebuild his life. Kane (who never had to work for anything--"If I hadn't been rich I might have become a great man") leaves no heir and donates none of his fortune. Everything (his dreams, possessions, wealth, and even Rosebud) will die with him. If Green shows a family's unselfishness, Kane shows a man so desperate for love he will buy and use whatever means possible to salve his loneliness. Green like the color, gives us hope of renewal. Kane is it's fatalistic doppelganger which suggests love once lost, can never be regained.
Last edited by Mr. Arkadin on December 13th, 2007, 5:53 pm, edited 1 time in total.
Top

Here's a twist: Citizen Kane may be more touted by critics these days, but not enough for Welles' Oscar to be bought at auction: