This week on SVENGOOLIE...

Brian McFadden wrote:He said they used bee foggers to create the London fog, which was ok at first when the "fog" stayed around the stage floor. But it would quickly rise, get into his nostrils and make it almost impossible to get his lines out. Speaking of lines, He said he was originally supposed to sport a British accent for the film, but it was rushed into production too quickly for Universal to get him a dialogue coach. So he simply tried to hang around with Patrick Knowles, who was also on the lot, and see if he could pick up his accent. But Porter told me he finally decided "the heck with it," and just clipped a few sentences but otherwise delivered his lines in the normal way!
Brian

Thanks for sharing this - I learned something new about Don Porter on the set of She Wolf of London! ... This is great stuff!

he was originally supposed to sport a British accent

In college, I was in a production of ROMEO AND JULIET. Predictably, we all strutted around affecting British accents. The director said, "That's not necessary. Just say the lines." Especially, since the story takes place in Verona!
Top

Love the story about trying for British accents in Romeo and Juliet! There was a very nice fellow that I knew quite well named Milt Subotsky. Although Milt was originally a New Yorker, he was co-founder of Amicus productions, which was extremely successful making horror films in Britain.
His first, City of the Dead (the title was changed to the less-than-classy Horror Hotel here in the states) is a film you really should catch next time it's on.

Although shot at Shepperton Studios in London, it's set in New England. Unfortunately, not everyone involved was very successful in faking American accents. Chris Lee does a fairly good American/Canadian accent, but both Dennis Lotis, as the heroine's brother, and Tom Naylor as her boyfriend, keep slipping back into British accents. There's one scene where Naylor actually starts a sentence sounding like an American and ends the sentence sounding British!

Thanks for the kind words. There's one other thing I meant to mention about Don Porter at Universal. In addition to being rushed from one project to another (The studio wanted to get the most out of its contract players,) he said it was an uphill battle trying to remember what he was supposed to be doing because he was sometimes in more than one film at a time and the movies were being shot out of sequence. To top it off, he said, on many of his movies the first day's shooting had him "In a clinch with the Leading lady," which was actually the last scene in the picture! 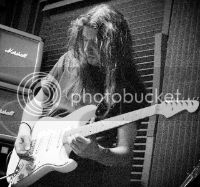 Brian McFadden wrote:Love the story about trying for British accents in Romeo and Juliet! There was a very nice fellow that I knew quite well named Milt Subotsky. Although Milt was originally a New Yorker, he was co-founder of Amicus productions, which was extremely successful making horror films in Britain.
His first, City of the Dead (the title was changed to the less-than-classy Horror Hotel here in the states) is a film you really should catch next time it's on.

City of the Dead (1960) is an incredible film. One of the better Euro-horrors that deserves more press.
Top

moirafinnie wrote:Hi Brian,
That's a great story about She Wolf of London. (I did have the feeling that despite the quality of the cast, that the movie was kind of rushed).

Did Don Porter have much to say about appearing in such film noirs as 711 Ocean Drive (1950), The Racket (1951) or The Turning Point (1952)? Did you have a chance to speak to him about some of the actors he shared the screen with, from Abbott and Costello to Martin and Lewis, not to mention Charlton Heston, Marjorie Main, and William Holden? How did he like working with directors such as William Dieterle, John Cromwell, and Alexander Hall?

Thanks in advance for anything you can share about his impressions.

You were so right about "She-Wolf" being rushed and I've just posted a reply at the end of the thread about the shooting conditions and schedules at Universal for the B's. (He said they almost never had more than 12 days.)

My interview with the actor was about Universal in the forties so, unfortunately, we didn't address the films, actors and directors you mention. But we did touch on his career in general and he volunteered an observation that I think he was uniquely qualified to make. Porter was one of the few actors to make a good living in films in the forties and then switch to an extremely successful TV career that continued right through the late eighties.

When he first started, he said, Universal was using a technique on its B-movies borrowed from its serial department. (The Universal serial department had actually "borrowed" the technique from Mascot which then became Republic.) By carefully working out the story board beforehand, it was possible to shoot every scene in a movie that called for a certain set, at one time. In other words, if there were five scenes throughout a movie that took place on a castle set, you could shoot them all in a day or two, saving an enormous amount of time and money on lighting changes.

Porter said early TV used the B-movie technique because they were sometimes shooting two shows a week! And by the mid-seventies when he appeared in Mame with Lucille Ball, even major studios were using this cost-cutting method. He lived long enough to see all of the other changes in the business too, but seemed to be very happy with the acting life.

According to Svengoolie's Facebook page, it's Boris and Bela in THE RAVEN this weekend. Have we seen that one recently? I can't even remember. The Killer B's are always worth watching!
Top

Yeah, we pretty much liked The Raven (1935) when discussing it last year here, but Karloff's poignant performance took the film to another level, as usual.

On March 15th...Svengoolie reminds us all to get our semi-annual eye exam...

Dr. Cyclops (1940-Ernest B. Schoedsack) with Albert Dekker as the mad scientist with the coke bottle glasses and a mean streak is the leading man. Dekker, who scored in such noirs as The Killers (1946), Suspense (1946), and The Pretender (1947), had a rare leading role in Cyclops as he tormented several people he has reduced in size and imprisoned. The special effects and sense of dread surrounding the evil doctor are very strong here, and the film is packed with familiar character actors, (Paul Fix, Frank Yaconelli, Victor Kilian, Charles Halton) some of whom spend much of the film running around in what look like paper napkins.
Avatar: Frank McHugh (1898-1981)

DR. C is cute and silly. I don't think I'll be joining them next week! I'll have to hit the neighborhood Redbox again!
Top

It's hard to resist comparing The Raven with The Black Cat. With the latter, the atmosphere is so wonderfully engineered, you get the feeling that something is happening even when nothing much is happening. With The Raven, there are many more shocks written into the script, but the mood -- particularly the lighting -- is so generic, you don't quite get carried away. Karloff's grotesque makeup is actually pretty good for it's time, but it borders on silly due to the perfunctory treatment by the DP.
"Immorality may be fun, but it isn't fun enough to take the place of one hundred percent virtue and three square meals a day."
Goodnight Basington
Top

For me...these are two compelling horror movies performed by the Masters. I'm loving that Karloff and Lugosi take turns in their movies, in being the aggressor. Ahhhh! They don't make horror teams like they used to. ( No offense to Christopher Lee and Peter Cushing. )
"You build my gallows high, baby."

I haven't seen DR. CYCLOPS in ages. I mean, we're talking over 25 years for goodness sake. But I do remember Albert Dekker being very creepy lumbering about and calling his tiny experiments "my friends!" (and then there's Charles Halton in a toga, something you very rarely see, and don't necessarily want to) When I first saw MIDDLE OF THE NIGHT, I could hardly believe it was the same person -- Dekker as a garment manufacturer in that Paddy Chayevsky "kitchen sink" drama bragging about "tootsies"! He did a lot of Actor's Studio-type films in the late '40's and '50's. But his whole demeanor to me always seemed to suggest "horror" or, at the very least, something kind of sinister.
Top
Post Reply
850 posts

Return to “Sci-fi and Horror”