Movie Palaces, Cinemas and Theaters of Yesterday and Today

Movie Palaces, Cinemas and Theaters of Yesterday and Today

Thanks to the TCM Refugees "Gang of Four" (Jon, Moira, Lynn, and Ptrek) for creating this new forum. There are a couple of threads on Movie Houses that I hope will catch on here. These are the homes of cinema; where movies were made to be shown and to be experienced within a community of moviegoers.

This board is the 21st century version of last century's theatre experience. Separately, we watch the wonderful fare on TCM in our living rooms and then experience it together on this board. But the nostalgia that I sometimes feel is for the community of the audience who shares in the experience. Last year, I had the pleasure of seeing Gold Diggers of 1933 on the big screen of San Francisco's Castro Theatre. It was immediately evident that I was one of the few that had seen this movie before. To hear the communal laughter, gasps of surprise and spontaneous applause after the musical numbers was delightful.

In the 1920's movie palaces began to sprout around the country. Uniformed ushers guided audiences through baroque lobbies, art deco dreamscapes, moorish tents, and other edifaces of exotica to a silvered screen that reflected the images that we still love today.

In this thread, I hope y'all will share your memories of childhood single screen theatres (dish nights, BINGO nights, spin the wheel): the snacks, the oddities, the houses themselves. Did your theatre have an organ or other live musical accompaniment? A special series that the you remember? Ballyhoo?

And while I have you here (if you've made it this far), I would appreciate hearing about the theatres in your region. I love to travel, and whenever I arrive in a new burg I always ask the locals if they have a single screen theatre. I've gotten tours of theatres from Hilo to Atlanta, and I'd love to hear about your's.

The best theaters in Baltimore proper are The Charles, which is a five screen theater but doesn't look like one, The Senator, and Bengies.

The Charles shows art, indy and foreign films. They also do a revival series that shows the occassional silent. They just finished a series of Japanese movies and are currently about halfway through a Bergman series. Here is The Charles as it looks today:

The Senator, which is the sworn enemy of The Charles for reasons i won't bother with here, is a single screen theater that shows first run movies. All of John Waters' films have premiered here, and so have some of Barry Levinson's. The sidewalk outside has the autographs of stars who have been there inscribed in concrete.

Bengies is a drive-in theater that shows second run movies. They keep threatening to close but never do.

For decent revival films, the AFI Silver in Silver Spring is not far away. And they serve alcohol!
Top

Was The Charles originally built as a theatre or was it refurbished into a cineplex?

The Senator looks great! What is its capacity? The small town where I was raised also had a Senator. Do you suppose they were all part of the same chain? Last I knew, United Artists had sold The Senator in my hometown and it's now mainly a concert venue. 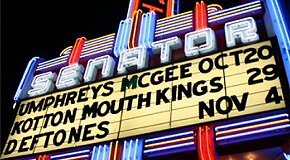 Was The Charles originally built as a theatre or was it refurbished into a cineplex?

The Senator looks great! What is its capacity? The small town where I was raised also had a Senator. Do you suppose they were all part of the same chain?

The Charles has been a theater since 1939, as has the Senator. The Charles originally had a different name.

The Senator seats 900 according to their Wikipedia entry.

The Charles is more convenient for me, and shows more revivals, so I've been to it frequently. Most of the time when showing silents they have live music accompaniment, usually local musician Thomas Pope on a keyboard.

The Senator looks great, but they're not often showing movies that I want to see, plus they're kind of out of the way for me.
Top

The history of Baltimore's Senator is a dramatic one; especially the recent developments! The Wikipedia article says:

On March 5th, 2007, the Baltimore City Commission for Historical and Architectural Preservation (CHAP) is scheduled to review and vote on the proposed Baltimore City Landmark designation for the Senator Theatre

Any idea how that turned out?
Top

There's a six month moratorium on architectural changes, and they're going to try to get landmark designation from the City Council.
Top

The Senator in Chico, California (once dubbed "Hollywood North") was designed by Timothy Pflueger who also created Bay Area movie palaces like the Paramount in Oakland and The Castro in San Francisco.

It's a grand old house with a "diamond" topped tower that glowed various colors. As a I child, I was a moth to that flame. It probably seats 1,400 people and features a balcony. The stairwell features a fresco of the mighty Hooker Oak, a now-gone massive tree in the town's park that was used as "Hangman's Oak" in Warner Brothers' The Adventures of Robin Hood.

When I was a kid, Saturday afternoon matinees drew me to the theatre. Mary Poppins, The Incredible Mr. Limpet, Tickle Me (the only movie I've ever walked out of), The Jungle Book... The facade and some of the interior used a scalloped pillaster as an architectural theme. And the Senator had lollipops made using this design. In retrospect, I'm astounded by this detail -- that even their suckers were part of the theme. I wonder who has the molds?

In the late 1970's the cinema was split into four. But it was restored back to a one-screen (in the 1990's, I think). During the 1990's United Artists was trying to be rid of it. The tower needed to be retrofitted, and UA was building innocuous multiplexes on the outskirts of the town. Funds were raised to save the tower, and the theatre is now used for rock concerts.

Like Jon, I live in the Baltimore area. The Senator is a great theater to watch a movie. The lobby area still has that old theater look to it . It's decorated with movie posters. The theater itself has one huge screen. It does have a modern sound system but lovely art-deco type lights and drapes.

It's hardly convenient for me but some films I just have to go. I've seen restorations of "Spratacus", "Lawrence of Arabia", "Vertigo" and "Rear Window" others. With them being out of debt now and some new arrnagements they plan to show classic movies more frequently. If I'm driving 45 minutes it's going to be something I know I can't get anywhere else.
Chris

The Stanford Theatre in Palo Alto, California was built in 1925. In the mid-1980's it was bought by "gazillionaire" David Packard (of Hewlett-Packard) and he had it restored to its original glory. Today, the Stanford shows classic movies throughout the week. I recently saw beautiful prints of Frank Capra's The Bitter Tea of General Yen, Dolores Del Rio joined by Fred and Ginger in Flying Down to Rio and Colbert's Cleopatra here. Perhaps most importantly is Packard and the Stanford Theatre's devotion to film preservation. They operate a film preservation laboratory in partnership with the UCLA Film Archive and work closely with the George Eastman House to restore classic movies. 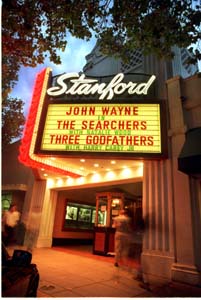 I finally completed a long-awaited goal to visit Manhattan's Ziegfeld Theatre and I was not disappointed. This venerable movie palace surely is Manhattan's largest (seating well over 1,000; with over 300 seats in the upper "loge" area alone.), and is one of the last single screen theatres on the island (along with the Paris). One of the last movie palaces to be built (in the 1960's), this blushing house sits near the site of Ziegfeld's original Follies theatre, and the foyer generously displays artifacts from those days. Programs, photos (Marilyn Miller, a young Sophie Tucker, etc.), even a plaque telling the history of the wood paneling. It's not on the scale of Radio City Music Hall, or the now-gone palaces from the golden age (The Capitol, for example). The interiors are all burgundy velvet, crystal chandaliers, and paneling of a dark red wood. It's a bit gaudy, and reminiscent of a New Orleans house of ill repute... The large wide screen is revealed from behind two curtains -- one of burgundy velvet, then a sheer. Fantastic sound system.
Top

Moraldo Rubini wrote:I finally completed a long-awaited goal to visit Manhattan's Ziegfeld Theatre and I was not disappointed.

What did you see there?
Top

What did you see there?

What did you see there?

You had to ask (if it had been something worthy, I would have talked about the film as well). This is the reason why I've never been the Ziegfeld before. Everytime I'm in Manhattan it's screen some horrible blockbust. This time I "bit the bullet". And it was worth it to finally see this great house.
Top

Moraldo Rubini wrote:You had to ask (if it had been something worthy, I would have talked about the film as well). This is the reason why I've never been the Ziegfeld before. Everytime I'm in Manhattan it's screen some horrible blockbust. This time I "bit the bullet". And it was worth it to finally see this great house.

It's kind of sad, really. I enjoy a good comic book movie -- Batman Begins was great. And I think Raimi has done some good stuff. But this franchise has never worked for me. The first one had its moments, the second was just plain horrible. I have no plans to see the third.
Top
Post Reply
36 posts