Past chats with our guests.

Brent, thank you for the precious comments about Helen Deutsch. I know I would love reading her lengthy memos and letters, too! And making Helen Lawson a victorious character is no small feat. Adapting someone else's play or book for film is not easy.

Just a few more "The Unsinkable Molly Brown" questions: Is it true that the part of Johnny Brown in the play was written specifically for Harve Presnell? I'd love to hear any details about Presnell!

Lynn, how lucky you were at USC!

Moraldo, I thought I was the only one whose invitations Garbo shunned.

Those are some amazing memories. Thank you so much for sharing.


Mary Whitely programmed a terrific retrospective on Gene Kelly that included an evening with Gene Kelly talking about his career.

Mary told me a charming story about how she never told Chuck Walters that Gene Kelly was her all-time favorite. "In the end, Chuck figured it out," she said, "and he gave me Gene Kelly for a Christmas present." It seems Chuck threw a holiday party at his house in Malibu and invited both Mary and Gene. During the party, Gene went over and talked with Mary and was sort of her date for a few minutes. "It was very generous," she said, "of both of them!"

Thanks again for sharing!
Top


I'd love to hear any details about Presnell!

I'm afraid I won't be of much help. Sadly he died in 2009 while I was gathering interviews for the book. I would have liked to have asked whether Chuck assisted his performance when transitioning from stage to screen, and -- if so -- how? I can tell you that Presnell wrote Chuck Walters a very lovely letter after filming, thanking him for "guiding" his Johnny Brown.

Debbie Reynolds notes that MGM dramatic coach Lillian Burns helped the two of them. I won't write about what Leslie Caron thought about the coaching "abilities" of Miss Burns!!

Presnell always seemed like a nice guy. That voice!

As you may probably know, Chuck Walters was friends with actress Agnes Moorehead. I don't know how close they were or when their friendship began, but they did work together on at least three occasions. Mr. Walters served as dance director in three of her pictures, Summer Holiday and Her Highness and the Bellboy at MGM, and prior to them, for Selsnick's Since You Went Away. In that first picture I'm sure Mr. Walters would have directed Miss Moorehead as she led a long conga line at the community dance for local servicemen. 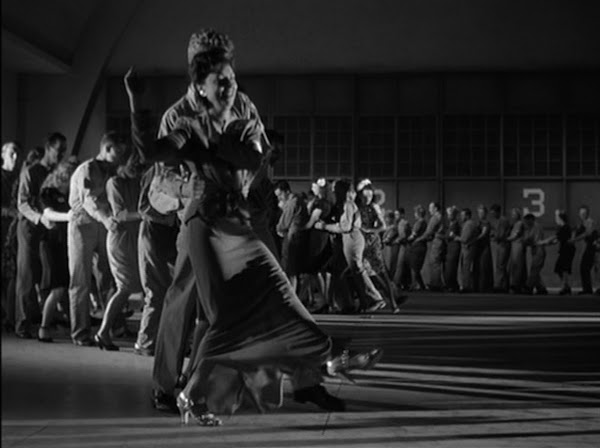 My question for you is, in your research did you come across any mention of this friendship with Miss Moorehead, such as any letters she may have written to him or in letters by a third party? If so, I'd be interested to know whatever you can recall.

Thank you very much for you visit this weekend.
Top

Thank you, Brent. It's nice to know that Presnell appeciated Chuck Walter's efforts.

I would love to learn more about Chuck's relationship with Judy Garland. Any of your favorite stories that you can share with us concerning their professional relationship or anecdotes that you weren't able to use in your new book would be a treat.

Thanks for asking about Agnes Moorehead. Alas, I did not come across anything more about their friendship other than what wrote in your post. Sorry. You are correct about Walters "staging" that Conga line. For the most part, Chuck Walters did not spend too much of his time away from the studio hanging out with actors. That said, he did have close friendships with Gloria Swanson and Audrey Christie from the 1930s through the 1980s, and on-again/off-again friendships with Lucille Ball and Nancy Walker. All were very intelligent, down-to-earth women like Miss Moorehead.

I will look to see if John Darrow was her agent at any time. He represented Ellen Corby in the 1940s and others of that ilk. I'll let you know if I find anything. (Having just moved last weekend, this will take a few days to find the right box.)

For what its worth, I think Agnes Moorehead is one of the most interesting actresses of her era. What a versatile talent.

I have much to say about Judy and Chuck. Let me gather my thoughts....
Top

Before you leave (must you?), was there anything that you wish you could've included in your book, but didn't?
Top


I would love to learn more about Chuck's relationship with Judy Garland.

A lot has been written about the professional relationship between Garland and her MGM musical mentor Roger Edens -- and rightfully so. Similarly, the role that Vincente Minnelli played in Garland's on-screen maturation has been frequently discussed. Both Edens and Minnelli did a lot towards developing and fine-tuning Garland's uber talent. Surprisingly though, Chuck Walters's relationship with Garland has gone virtually unnoticed. As a dance director, Walters guided Judy through four films (the Presenting Lily Mars finale, Girl Crazy, Meet Me in St. Louis, and Ziegfeld Follies.) He directed her in Easter Parade and Summer Stock. (Would have directed her in The Barkleys of Broadway, Annie Get Your Gun, and Royal Wedding.) He staged and directed her personal appearances at the Palace Theater in 1951, the Los Angeles Coconut Grove and Chicago's Orchestra Hall in 1958, plus added ideas for her 1956 return to the Palace. When pieced together, this list shows that Chuck Walters was the calming, supportive, creative man who showcased Garland at her best through three very different eras of her career - screen ingenue, leading lady, and "live" performer.

Above all, I think it was the fact that Garland implicitly trusted Walters that made their partnership so successful. I don't think she ever felt "used" by him. Chuck listened to Judy and kept her as part of the creative process. For example, Garland wanted to play the "morning after" scene in Easter Parade without make-up. Chuck listened and agreed; her character was supposed to have been awake all night with worry. Despite being called on the MGM corporate carpet for his unflattering presentation of their top money-maker, Chuck (and Judy) remained proud of that sequence.

When he was a dance director, he was able to tap into Garland's wry sense of humor. How delicious is she in "Bidin' My Time" and "Could You Use Me" from Girl Crazy?! Also, how comically adept is she in that scene in Meet Me in St. Louis where Judy/"Esther" is being bounced around the Christmas dance by those infant suitors.

He also gave her the self-confidence to tackle "glamorous" dances with aplomb, despite her self-consciousness about her looks - the Lily Mars finale, "Embraceable You" (Garland at her dancing best!), "A Great Lady Has an Interview," or "Get Happy".
Doing my researcher for my book, I was able to listen to an audio tape of Chuck commenting while watching the Lily Mars finale on a videotape. When the number began (with all the chorus girls, heavenly choir, and miles of twirling tulle) he joked, "I staged all this...sh*t." When they got to her close-up at the end of "Where There's Music" he paused and sighed, "Isn't she just beautiful!"

How amazing is "Get Happy." Chuck just knew what to do with music -- and with Garland. He could keep her within the confines of her happy, down to earth film image while (at the same time) allowing her to expand her persona. That iconic sequence took a mere week to create. (Chuck says Garland learned the choreography in a day.) Staggering.

After Metro, it was Chuck (and Roger Edens) who gave Garland the perfect showcase to prove she was "more than just a movie star." The fact that Chuck expected her to ACTIVELY move and dance through three numbers -- picked up twice by her dancing "Boyfriends" -- for 13 shows a week at first; then cut to ten, truly demonstrates that she trusted him. And, afterward, Judy was not hesitant about publicly expressing her gratitude. I'd argue that it was during that first Palace run that Judy Garland became a theatrical immortal.

In 1981, Sid Luft asked Chuck to come over to his home and discuss an idea Luft had been developing. Garland's ex-husband/manager wanted to create a multi-media film and live-action production wherein Chuck would "return" Judy to the Palace Theater. Walters politely declined!!

Away from work, Chuck did admit that he and Judy considered marriage. However, Chuck did not want to go "that route" (later saying "I didn't want to be Mr. Judy Garland.") Minnelli and Garland married not too long after that.

I could go on and on...(and from the size of this post I think I have!) Bottom line, the director-muse relationship shared between Judy and Chuck was paramount to the creation and on-going re-creation of -- and (now) appreciation for -- that cherished entertainer we call Judy Garland.


was there anything that you wish you could've included in your book, but didn't?

You know, writing a biography about a very private man who shied away from the public spotlight and who passed away more than 30 years ago was (in a word) daunting.
I am happy that I was able to include so many preliminary chapters to cover his years as a performer on Broadway, even though the focus of the book was clearly to discuss this great Hollywood talent. Those early years, I felt, were crucial in understanding how Chuck Walters learned his craft.

To ensure the book's narrative flowed smoothly, some material was relegated to the Notes section at the end of the book. But I'm happy that that information did not get lost.

I would have liked to "find" more about his relationship with his parents. I spoke with several people in Anaheim (his home town) who remembered some things -- but, seriously, some of them had no idea Chuck was a big director working with Sinatra, Garland, Astaire, Grant. (Chuck was modest!)

I asked several people about Chuck's political affiliations and I was told (unanimously) "Chuck was not political." Still, I wish i could have found someone who may have heard what he thought about McCarthyism, Civil Rights, Stonewall.

I'll have to keep looking.

Thanks for having me as a guest.

Brent, thank you for such a thoughtful, detailed interpretation of the Judy Garland/Chuck Walters relationship.
And, yes, I am glad I asked!

We have been so lucky to have you visit with us concerning your latest book.

Thank you again for your time and consideation. We wish you much happiness with your current book, and your future projects. Please come visit us again!

Thanks for dropping by! Looking forward to getting your book. If you do a book tour, I'll be looking for an autograph!

Thank you, Sue Sue. It was grand.


...and Moraldo, if Roger Edens is seated at your piano, then I say let the girl sing! Thanks for the chuckle.