The Artist (2011) a contemporary silent

This film is being released in theaters - nationwide on November 23rd, 2011!
Internet Movie Database confirmed it, limited showing ... Yippee!

Let us know when you see it, Kingme!

Here is an interesting article from the UK daily The Independent about The Artist with a few questions asked to a famous film historian.

Michel Hazanavicius: Silence is golden for the big noise from France

Michel Hazanavicius's The Artist wowed Cannes and is set to shine at the London Film Festival. Could it spark a revival for a forgotten genre? By Geoffrey Macnab

There won't be many movies that audiences will enjoy more at this month's London Film Festival than Michel Hazanavicius's The Artist. Rapturously received in Cannes, this is a classic tale of old Hollywood: an A Star is Born-style yarn about a slick movie star, George Valentin (Jean Dujardin), whose popularity begins to wane with the arrival of the talkies in the late 1920s, just as that of the Theda Bara-like It Girl Peppy Miller (Berenice Bejo) rises.

The Artist is a film of extraordinary visual zest, humour and pathos. It also happens to be French-made, black and white... and silent.

Contemporary audiences often tend to feel uncomfortable with silent movies. There is a sense that silent cinema has suffered because it is treated with too much reverence. Films that were huge popular hits in their day are shown in restored versions, with newly composed scores, at prestigious festivals where they're watched by the cognoscenti. The downside is that they've lost their connection with a mass audience.

Gloria Swanson's famous quote, "we had faces then", when she was playing silent star Norma Desmond in Sunset Boulevard (1950), evokes a lost era of luminous close-ups. To many viewers today, those faces seem like eerie relics of a lost civilisation.

Anyone who grew up in the 1970s can recall seeing silent cinema regularly on kids' TV. Charlie Chaplin, Laurel and Hardy, and Harold Lloyd were familiar presences. In the 1970s and 1980s, silent films (and documentaries about silent cinema) were also staples of the prime-time schedules on ITV (for example, the Thames Silents). From today's vantage point, it is hard to envision quite the fanfare with which the first Channel 4 broadcast of Abel Gance's Napoleon (1927) was greeted in the early 1980s. Gradually, the silents disappeared from the main channels into the twilight world of cable and satellite. Under chief executive Michael Jackson in the late 1990s, Channel 4 stopped its backing of the Channel 4 Silents, thereby ringing the death knell for silent movies on mainstream TV.

The evidence now is that we may be on the verge of another major silent-movie revival. The Weinstein Company will be releasing The Artist in the US in late November, in good time to position it for the Oscar race. With Hazanavicius's film in the vanguard, there is bound to be renewed interest in silent cinema as a whole.

Even without the push given by The Artist, silent movies are back in the news pages. Earlier this summer, there was huge excitement when The White Shadow (1924), a "lost" Alfred Hitchcock film, turned up in New Zealand. Amid the hype, some commentators overlooked the fact that Hitchcock hadn't actually directed the film. It was made by Graham Cutts.

Nonetheless, Hitchcock was the assistant director and was intimately involved in every part of the production. He provides a key link between silent cinema and the modern era. His work is held in such esteem that the British Film Institute's "Rescue The Hitchcock 9" campaign – its attempt to raise £2m to restore his nine surviving silent films – has been treated as if it was a liberation struggle. These films have been locked away in archives and left to deteriorate. Now, supporters are desperate to free them.

At the launch of the London Film Festival programme earlier this month, audiences were startled by the clip shown from Miles Mander's The First Born (1928) In its restored version, the film looked pristine and strangely modern, as if it was a Michel Hazanavicius-style homage to the silent era rather than a movie made more than 80 years ago. Co-scripted by Alma Reville (Hitchcock's wife) and produced by later Ealing boss Michael Balcon, this is an embroiled melodrama about jealousy and infidelity among the West End set.

"The sex lives of the upper classes come under scrutiny in this tour de force of late silent British cinema," is how the festival is billing a film which has a sheen of elegance and sophistication... and even some mildly risqué elements. The pre-blonde Madeleine Carroll (best remembered by most audiences today as the woman Robert Donat meets on the train and ends up handcuffed to in The 39 Steps) is filmed naked in a bath.

As Brian Robinson, Communications Manager, Archive and Heritage, at the BFI, notes of Carroll's bathing scene, "there's a rare nipple exposed in the bath. Nipples were not generally seen [in silent films]."

The honorary Oscar given last year to British film-maker and historian Kevin Brownlow for his "wise and devoted" work in preserving and championing silent cinema was another sign that a new silent-movie revival might be under way. "The silent film was not only a vigorous popular art, it was a universal language – Esperanto for the eyes," Brownlow once stated.

His remark is borne out by the example of The Artist. In normal circumstances, a French film from a relatively unknown director like Hazanavicius (who'd previously enjoyed modest success with his OSS 117 spy spoofs) would be a tough sell in the international marketplace. However, this was a French film without dialogue. So what had, initially, seemed the movie's greatest commercial liability turned out to be an unlikely strength.

"I'd only get an amused reaction. No one took this seriously," Hazanavicius said of the reaction when he first proposed making a silent movie. As it turned out, The Artist sold very widely in the international marketplace. In distributors' eyes, this seemed like a Hollywood film. The presence of actors John Goodman, Penelope Ann Miller, James Cromwell and Missi Pyle reinforced its American credentials.

As played by Jean Dujardin, George Valentin, the debonair and dashing protagonist of The Artist, is clearly modelled on Douglas Fairbanks. The irony of this is that Kevin Brownlow is currently trying to make a documentary about Fairbanks through his company Photoplay Productions, and no one will finance it.

Contacted this week, Brownlow pointed out that, while silent movies are still championed fervently by specialist festivals like Pordenone, Bologna and San Francisco, it remains an uphill struggle to get them on mainstream television. He too is hoping that, if The Artist is the major box-office hit that is being predicted, it will kick start a revival of silent cinema in general.

'The Artist' and 'The First Born' screen at the London Film Festival ([url]http://www.bfi.org"%20target="_blank"%20target="_blank.%20uk/lff[/url]), which runs from 12 to 27 October
http://annhardingstreasures.blogspot.com/
Top

It's coming to my hometown! Yippee!!!

Sooner or later, somebody was bound to do this. It's a great idea, and I hope it finds support.
Top

charliechaplinfan wrote:I'm dying to see it, I hope it gets a good release here. I might have to wait until it comes out on DVD but see it I will.

According to the website Silent London, The Artist should get a UK release on December 30th.

Xmas holiday here I come, it's good to have a reason to escape the house over the Xmas period.
Failure is unimportant. It takes courage to make a fool of yourself - Charlie Chaplin
Top

I don't go to many movies anymore. But I almost always go at Christmas time. Such a holiday thing to do!
Top

I agree, although we do take the kids to a kids club, we hardly ever go ourselves, The Artist is a good excuse.
Failure is unimportant. It takes courage to make a fool of yourself - Charlie Chaplin
Top

Thank you for posting the pics from The Artist! It looks absolutely gorgeous. It will be showing in Cleveland! I cannot wait to see it.

This movie has great photography, wonderfully paced, and the acting of both Jean Dujardin and Berenice Bejo as George Valetin and Peppy Miller was outstanding. The movie set in the year 1927 and the costumes and the flapper gal images are perfect even down to the hairstyles and makeup too. I even love the performance of John Goodman as Al Zimmer he was a pleasant surprise as well.

Jean Dujardin and Berenice Bejo in The Artist 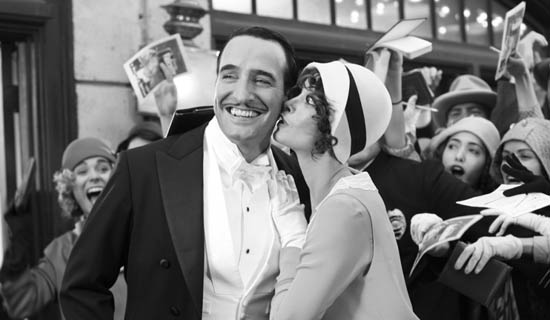 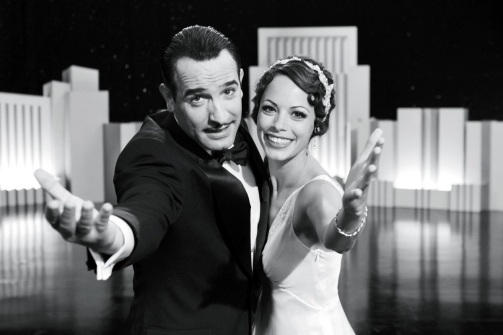 Note: He looks a lot like Walt Disney with a mustache.

It's all about the stardom of Valetin and Miller ... one went up ... while the other went down! I do not want to spoil you at all. But by watching this Trailer you will eventually figure it out yourself.

Great Stars ... James Cromwell, Penelope Ann Miller, Al Lauter, Missy Pyle, and Beth Grant too. Not to mention Malcolm McDowell, Basil Hoffman, and Ken Davitian as the Pawnbroker who was excellent in this movie.

The main problem with this movie is that I was in awe of how visually stunning the photography was and in 20 minutes of the movie I lost track of the story here and because I was impressed how well Michel Hazanavicius written and directed this film. I would recommend this movie to anyone here that loves Silent Films and I'm definitely getting the DVD when its comes out. I'm planning on seeing it again; in a couple of days and this time concentrate on the acting and the story line so I can get a better picture of this wonderfully crafted film that was made by Hazanvicius! No wonder this film was well received by critics.

The Black and White Images in this film is unbelievable! I love it!
Top

I saw THE ARTIST yesterday, and was perhaps expecting to be somewhat disappointed, based on a couple poor reviews (on Nitrateville) by other film buffs, and my normal inclination to be a Negative Nellie (yes, I’m working on that..) but am so happy to report that I found this film to be quite wonderful! I was hooked from the opening credits, delighted in the recreation of period film making, and have developed a huge crush on star Jean Dujardin. And OMG, the locations and interiors used – I was in Art Deco heaven! A few quibbles perhaps – I’d have hoped the leading lady could have looked more of the period, and I found the musical score to be hit and miss, and the inclusion of the VERTIGO theme did underscore the darker scenes at the end well, but still seemed odd for me to hear it. I will probably go see this film again.

Here is a link to an article in the LA Times about the filming locations:
http://www.latimes.com/entertainment/ne ... otogallery
Top

Thanks for the review and the link, Jezebel. I have to wait until the 20th of January before this movie is playing locally, but I'm determined to try to get out to see it on the big screen.
Avatar: Frank McHugh (1898-1981)

moirafinnie wrote:the inclusion of the VERTIGO theme did underscore the darker scenes at the end well, but still seemed odd for me to hear it.

It looks as though Kim Novak is none too happy with the use of Hermann's score in The Artist.

Personally, while I instantly recognized the music, I thought it worked very well in the context of the scenes, and more, it worked to the point of the entire movie. Hermann's music is not the only thing borrowed in the film, which is, after all, a love letter to the movies.

Regardless of how one feels about using Hermann's music, calling it rape is way over the top, even for a respected actress like Novak.
"Let's be independent together." Dr. Hermey DDS
Top

I also read this in the newspapers of the morning and was quite impressed (unfavorably) by Ms. Novak's remarks.
Top
Post Reply
84 posts