Picture this..one rainy afternoon last year...I'm in my living room glaring at the tv...I'm watching Gloria Swanson in Sadie Thompson...Lionel Barrymore has been getting at her....then suddenly you realize this guy isn't what he appeared to be and then!!---the video stops...the rest of the movie is lost. The next hour is me yelling at the TV.

Is it just me or isn't that the most annoying time to end...if the film had cut out three minutes before it would have been better...but leaving a cliff hanger like that? It would be like cutting stars just after "Luke I am" and never telling the audience what he is.

I was so desperate to find out what happened I bought a copy of the play Rain...a very out of print play which the film was based on 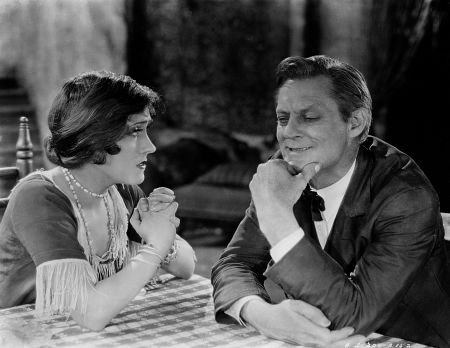 Yes, it's absolutely heartbreaking as well as disappointing, isn't it? Especially after investing so much time in the story. I still have hope that they will find the missing footage someday. It really should be labeled right on the front of the dvd box that this film has no ending, or a pieced together one.
Top

I bought a copy of the play Rain

You're good. I had to send to The University of Louisville for a copy. That play is hard to find! Did you not have access to the 1932 film featuring Joan Crawford? It's a dramatic and atmospheric adaptation, with our gal Joan at her sultry, unpredictable best.
Top

I also think you should view Joan Crawford's "Rain"; and also Rita Hayworth's "Miss Sadie Thompson"....
Both are quite good examples of their story and the supporting cast in both are excellent...

I for one, saw Joan Crawford's Rain and its a good one and that was years ago (more like eons ago) and I wished someone show Rain again - I really do. However, with Miss Sadie Thompson (the one with Rita) is flamboyant, sexy, and downright a fun film to watch ... but, again it is sanitized to a degree.

Either way, you got a winner in both films ... Rain is more true and factual ... while Thompson is fun and stylish. Whatever, film you like to watch ... I wished TCM show both of them at the same night ... preferably on Prime Time to give both fans of these enduring films a chance to see Sadie Thompson in a new direction and light.

I love the effect of the almost constant rain. It's both lulling and maddening. I'd love to see this on stage!
Top
Post Reply
7 posts • Page 1 of 1