by movieman1957
Well, this is fine news. I have an old full screen VHS of the film so that will be upgraded. I thought the CD of the songtrack was still available and was really the first Beatles CD to be remastered. by MichiganJ
It's this edition, which gets rid of Martin's instrumental tracks and instead includes most of the songs found in the film. It was the first disc which featured remastered tracks so it will not be anything new (unless they include the full version of It's All Too Much, which I doubt).
1. Yellow Submarine
2. Hey Bulldog
3. Eleanor Rigby
4. Love You To
5. All Together Now
6. Lucy In The Sky With Diamonds
7. Think For Yourself
8. Sgt. Pepper's Lonely Hearts Club Band
9. With A Little Help From My Friends
10. Baby, You're A Rich Man
11. Only A Northern Song
12. All You Need Is Love
13. When I'm Sixty Four
14. Nowhere Man
15. It's All Too Much 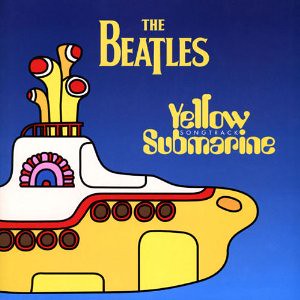 by movieman1957
This CD was a gift from my daughter several years ago. I still have the LP so if I have some desire to listen to Martin's music, which I have not had for some time, I can still do it. I'm not inclined to buy the CD of the LP either when this one is a much better grouping.

by MichiganJ
Paul McCartney was the guest on today's Fresh Air.
Stream and/or download link

Other Macca news:
The Deluxe Edition of Paul and Linda's Ram is set for release May 22. They are saying that the second disc will include 8 bonus cuts, including rarities. (I'm really hoping for a better version of A Love For You.)

by movieman1957
Was "A Love For You" a "B" side? Not familiar with it. I've been waiting for a remaster on this one. "Dear Boy" should sound pretty good.

by MichiganJ
I think Ram is my favorite McCartney album. At least it's one I return to most often.

A Love For You was an unreleased track from the Ram sessions until a version of it appeared on the soundtrack for the remake The In-Laws. (Why there, I have no idea.) The In-Laws version is way over-produced and McCartney's vocals aren't nearly as spirited as early versions.
It's still an okay song, but in my opinion, McCartney could have easily released one of the earlier versions as a single. It's one of my favorite McCartney tunes.

You can hear a snippet from the In-Laws version at Amazon.

by MichiganJ
Details on the reissue of McCartney's Ram, which comes out May 22.
http://www.antimusic.com/news/12/April/ ... view.shtml

I'm happy to see A Love For You is included. I'm not familiar with the "Jon Kelly" mix, and, while that means it is a relatively recent mix, Kelly is a good producer, so it should be pretty good.


The Harrison documentary, Living in the Material World is finally being released here in the States on both Blu-Ray and standard DVD on May 1.

Since it is called Volume 1, that bodes well for additional volumes.

by RedRiver
That must have been Sunday's show. It ended with a song whose title I don't know, but it was clearly a Beatles tune.

by movieman1957
Paul McCartney's remastered "Ram" showed up at my house. I had a chance to listen to it in the car and while not a huge difference it is more clear on many of the songs than the original CD. Particularly clearer are the guitars in some spots and the ukulele on on the two versions of "Ram On." For better and/or worse the background vocals seem a little more upfront. It means Linda's voice is more prominent but it also helps showoff Paul's gift for arranging those vocals. It was interesting to really listen to the percussion build up on "Too Many People." It may have been there on the old recording but I hadn't really noticed.

The second CD includes updated versions of "Another Day," its "B" side "Oh Woman, Oh Why" and "Little Woman Love." Some nice unfamiliar sounds were apparent to me that made them fun to listen to. As for the other songs I often feel there is a reason why things were left off of an album. These were for a reason. While they may be of interest historically there is, in my opinion, little to recommend on the remaining three. One runs 8 minutes that I didn't bother to finish.

It's always nice to have clear recordings. I went for the $12 special edition. Somehow the $95 deluxe set was overkill for me. Based on the little insert "Venus and Mars" "Wings At The Speed of Sound" and "Wings Over America" are to follow.

by MichiganJ
For me, Ram is the best of the remastered McCartney albums to date. (The others, so far, include McCartney, McCartney II and Band on the Run.) Done by the same folks who remastered the Beatle and Lennon discs, the remastering stays true to the original recording but adds greater separation, allowing one to hear instruments, riffs, etc., that were previously buried. On almost every song, I hear more of Hugh McCracken's guitar riffs and fills than before. (It's David Spinozza on 3 Legs and Eat at Home.) And the acoustic guitars and ukes sound better than ever.

Linda's vocals are also brought up higher in the mix, and while she is no singer, the album is credited to Paul and Linda McCartney (one could argue it's the first Wings album), and I prefer hearing her, at least doing backup. (I think she's great in Long Haired Lady; funny in the nasally "Is this the only thing you want me for" bit, and not bad in the "Love is long" fade out bit. But I'll admit that Linda is no Yoko.)

Bit surprised about the reaction to the bonus cuts. I was never a huge fan of Paul's first solo single Another Day, but always loved the flip side Oh Woman, Oh Why. Little Woman Love would fit right into the Ram album, and, of course, was released as the b-side to Mary Had a Little Lamb. I previously stated that I think A Love For You could have been a McCartney hit single, and while this mix is preferable to the one on the In-Laws soundtrack, there are better mixes out there. Still, McCartney does some excellent voice-shredding vocals. A bit of Hey Diddle found its way onto the Wingspan collection, and really feels right at home with the other Ram cuts. The instrumental Great Cock and Seagull Race is one entirely new to me, and I kinda like when McCartney attempts the blues. Rode All Night is both tedious and interesting. Obviously a jam, it really seems that the band is having a great time, and that comes through, especially if you aren't paying too much attention to it. Sunshine Sometime is and early instrumental that was reworked for the Rupert the Bear cartoon.

In other Beatle related news: the Blue Meanies have just put up a new website:
http://yellowsubmarine.com/

by movieman1957
"Hey Diddle" I thought was pleasant enough but like some things with him I kept hearing the same lyric. The feel reminded me of "Heart of The Country."

"Oh Woman, Oh Why" has always been one of my favorite Paul songs. I discovered it as a B side. I love the way the guitar slides on that and the bass work. With "Little Woman Love" I thought maybe "Mary Had A Little Lamb" would turn up but maybe later. I still have my 45.

I haven't bothered with the "McCartney" remaster. I have the regular CD. Would you recommend it? I have no particular fondness for "McCartney II."

Someone also remastered "Press To Play," "Flowers In The Dirt" and "Pipes of Peace" (if I recall correctly) but I haven't upgraded any of those.

by MichiganJ
From what I understand, there were a number of McCartney albums remastered in 2010/11 including: Wild Life; Flowers in the Dirt; Pipes of Peace and Press to Play. There may be others but in any case, I think they are only available as downloads and do not include any bonus material. I haven't heard any of them so can't comment.

The reissues of the McCartney catalogue I do have came out in 1993 and most of them include bonus material, generally singles and b-sides. (Press to Play includes Spies Like Us for instance). These remasters were a lot better than the original CD releases in the mid 80s.

The latest series "The Archive Collection", for my ears, are the best. The McCartney album is much more intimate, and the sound quality is so good it feels like McCartney is in the room with you. The bonus material includes Suicide (a snippet of which is heard at the tail end of Hot as Sun/Glasses), live versions of McCartney songs from the Glasgow concert in 1979 and a couple of so-so demos.

I agree with you about McCartney II, but was surprised at how much I enjoyed revisiting it. The sound quality is better than the original mid 80s release, and the album seems to flow much better. There are a lot of bonus cuts, but nothing special and a few that go on forever.

Band on the Run did see a 25th Anniversary Edition which included a remastered edition of the American version of the album. (Which means it includes Helen Wheels). The Archive Collection is yet another remaster, but does not sound very different than the 25th Anniversary. (There is more bass.) Helen Wheels is relegated to the bonus disc, which also includes the b-side Country Dreamer and a number of tracks from the TV special One Hand Clapping. They are terrific versions and the entire show should be released.
All times are UTC-05:00
Page 5 of 7