Best moment in MY FAVORITE WIFE - Grant has entered an elevator with his new bride when he spots Dunne in the lobby and as the elevator door closes his body leans 90 degrees in order to keep looking at her.

McCarey was supposed to had directed the film but he had another one of his near-death experiences and wasn't able to. Too bad. There would had been more moments like the one I described above.
Gary J.
http://www.facebook.com/profile.php?id=1783165551
Top

I saw Harry Potter and the Deathly Hallows Bk 7 part 2 It was a very satisfying movie for lovers of the books and a great ending to a series. My nephew and I have seen all of the movies together. We saw 7 part 1 in November and it was snowing when we went in, yesterday when we went in the temp was 99 degrees. More shocking than the heat: the price of 2 cokes and a popcorn: $18.50. The movie cost was only $5, reduced since it was no longer a new release. Anyway, we had a great time and a few thrills.
Top

Yesterday, I watched "A Face in the Crowd."

I had mixed feelings about it. Great work by Andy Griffith. The movie would not exist if not for his performance. Patricia Neal left me somewhat cold, on the other hand.

I think the weakness of the film was showing people instantly doing what Griffith said (take dogs to the sheriff's house, etc.) In a way, that reminded me of "Network," a 'great' film I utterly can't stand. However, when "A Face in the Crowd" got political, it began reminding me of "Meet John Doe." In both, a savy woman picks a bum to be "the average American" and has a flirtation with fascism. In the Capra film, of course, the man is a hero. In Kazan's film, the man turns out to be a villain.

At times, Griffith seemed to be a bit like Elvis, or what Kazan and Schulberg thought of Elvis.
Top

Birdy wrote:I saw Harry Potter and the Deathly Hallows Bk 7 part 2 It was a very satisfying movie for lovers of the books and a great ending to a series. My nephew and I have seen all of the movies together. We saw 7 part 1 in November and it was snowing when we went in, yesterday when we went in the temp was 99 degrees. More shocking than the heat: the price of 2 cokes and a popcorn: $18.50. The movie cost was only $5, reduced since it was no longer a new release. Anyway, we had a great time and a few thrills.

Re: Harry Potter 40s cast
OK, I'm up with you now!! I should have looked back a little,l just referenced by your avatar! No way Elizabeth Taylor for Hermione. Liz was too perfect at 12, Hermione is a little geeky. I would go with my other cat's namesake, Margaret O'Brien. Another great choice, frizzy hair and all, would be Bonita Granville. My choice for Bellatrix: Gail Patrick. That woman scares the bejeebers out of me. And maybe Jean Dixon for Mrs. Weasley?

Re: the melancholy blues: I already got that when the last book came out during which I shut myself in for 36 hours and told my family not to call or speak to me unless someone died. It was a wonderful day and a half.
Top

We always take our own stuff fearing once we give in to the one time buying of popcorn we'd be pestered everytime, our cinemas don't have tight regulations on this thank goodness, I would imagine our prices are comparable. An article in the Saturday paper today regarding calories and fat in a box of cinema popcorn, it's way heigher than I would ever imagined. Not that I want to put anyone off, there is a campaign running here to make restuarants put calories and food info on their menus to help consumer chose the healthier options or at least to know when just how much fat is in a certain dish, they're trying to extend it to cinema treats too.
Failure is unimportant. It takes courage to make a fool of yourself - Charlie Chaplin
Top

Love the idea of Gail Patrick! and Jean Dixon is a great favorite of mine.
Top

Oh, Margaret O'Brien would be TERRIFIC. She always had that exasperated edge about her, perfect...if they could lose the coyness she also displayed. Gail Patrick? Don't think she'd be weird enough. oooo, how about Gale Sondergaard. Herbert Marshall as Lupin. and Bette Davis as Tonks. HA!!!!!!!
Top

Just heard from our JDB1. This is her take on the HP series:


Anyway, I don't quite see Roddy McDowell as Harry -- he's too passive and, well, girlish. Maybe Darryll Hickman or Dean Stockwell. How about the young Richard Erdman or the Henry Aldrich guy (forgot his name) as Ron? Or any other of the many young actors of the 40s who played befuddled sidekicks. Actually, I think the actors of old who perfectly capture the Ron Weasley sensibility are Keye Luke and Sen Young, Charlie Chan's No. 1 and No. 2 sons. But I guess that wouldn't work. I can't see Mickey Rooney in this millieu at all, although I can see Shirley Temple, perhaps as one of Harry's puppy love interests.

I can see Taylor as Hermione, but also Jean Simmons or another like them; on the American side Bonita Granville or Marcia Mae Jones. How about Skip Homeier as Draco? Actually, I think Leo Gorcey would be good in the part, but what about the accent? Hepburn seems fine to me as McGonagall, also Ann Revere. How about Henry Daniell, Basil Rathbone, Conrad Veidt, George Macready -- as either Snape or Voldemort? I have an idea that maybe Charles Laughton might make an interesting Dumbledore, or he could be Harry's uncle, with Elsa Lanchester as the aunt. What about Orson Welles as Dumbledore? Then he could have worn a really snazzy false nose, as was his wont. I'm seeing Angela Lansbury or Jayne Meadows as Bellatrix. And Henry Travers and Spring Byington as Ron's parents.


I love this discussion!!!!!! Henry Travers and Spring Byington, YES!! Charles Laughton and Elsa Lanchester? DOUBLE YES!!! Is there such a thing as a double yes???

I also just love Henry Daniell, so if you could fit him in somewhere, I'd be happy.
Top

That would be perfect.
Top

I've been watching the original Danish version of The Killing, Forbrydelsen, not a film I admit but for someone who hardly ever watches TV programmes this was 20 hours of gripping drama, watched in one week, it was a bit of an addiction, getting the next fix of programme. It was really well done with atomosphere and twists and turns galore, some right guesses by me and some wrong guesses, completely gripping.
Failure is unimportant. It takes courage to make a fool of yourself - Charlie Chaplin
Top

Following watching the series The Killing I've watched a film via streaming that stars the same actor, Lars Mikkelsen it was called Kira's Reason - A Love Story, it deals with similar themes as A Woman Under the Influence, a woman who has alcoholic and promiscuous tendencies. She has been released from a psychiatric hospital and is taken back home by her loving husband, she can't function within normal society restraints, she blurs the boundaries, causes embarrassment and upset to her husband and children. We do find out what has caused it and the love of her husband, a strong bond seems to pull her through.
Failure is unimportant. It takes courage to make a fool of yourself - Charlie Chaplin
Top 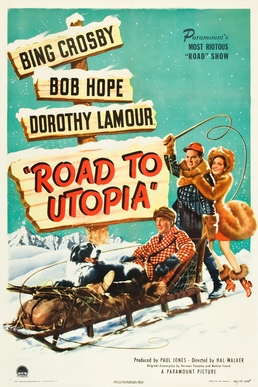 Most of you know the story line by heart and I know this is a great lighthearted comedy with Robert Benchley giving us wonderful witty (did a great job here) narration along the way. I love the teaming of Hope and Crosby so much that being handicapped (hard of hearing) they entertained me in a timeless fashion.

It's amazing to see Hillary Brooks in this movie playing a perfect second fiddle to the vivacious Dorothy (Lamour was incredibly charming in this movie!) Lamour in this delightful movie about the Alaska Gold Rush. Hillary Brooks is so versatile as an actress she can hold her own in comedies like this one. I think this is the first time I seen her in a comedy. I associated Brooks in the Sherlock Holmes series starring Basil Rathbone as Holmes. She and Lamour were wonderful together.

I love the two tough men Sperry and McGurk ... played by Robert Barret and Nestor Paiva respectfully trying to get the map of the gold mine from Duke (Hope) Johnson and Chester (Crosby) Hooton in more ways than one. The movie is very entertaining and its a joy to watch it again on Turner Classic Movies and I had a blast seeing many great routines of Bing Crosby and Bob Hope in this charming movie back in 1946.
Top
Post Reply
8104 posts