I searched but didn't find any reference to this one. I'm still on the fence about whether this movie was filmed tongue in cheek or on the level. Some of the lines by Mr. Loggia seem kind of 1930'ish, and although I love Bill Pullman in nearly everything he does, sometimes he seems to be going a bit over the top also. He reminds me a lot of Jeff Daniels in this because both guys often play similar roles. There is one line where the entourage is heading to the clean room where the Captain does not want to let Bill (Potus), in and Bill says: "Open . . . . . the door". The way he says it sounds like a real Pres. would act and say, but on the other hand it sounds kind of William Powell'ish in a Thin Man movie. In any case, when I'm channel surfing and run into it, I generally go ahead and watch to the end. I love Goldblum and Will Smith in the aircraft getting ready to set off the virus with their Oops, and When the fat lady sings. From beginning to end there are some interesting acting done and you think; 'This is on the level', then someone says or does something and you feel like you're back in the transition time between silents and talkies where everyone either over-acted, or continued using their faces to show emotions rather than words. If you're younger and have never seen it, you might want to take a shot at renting it for kind of a fun Saturday night to get your mind off of term papers coming up.
.

I'll list a few that get mentioned among "bad" movies at times by various sources, or generally looked down upon for different reasons. Though I dig'em:

Bless you, Clore! It's either wait till July or plunk down two sawbucks for the long-term pleasure of owning the DVD.
Avatar: Frank McHugh (1898-1981)

My pleasure Moira. The film wasn't - I watched it a week or so ago. I prefer the earlier part of the career of Delmer Daves, but still I had to check this one out.
Top

But I've always had a yen for James Franciscus....
Top

But he'll give a sou to sue.

Liberace's attempt to break into the flickers is going to be aired this morning on TCM, April 7th at 9:30am (ET):

Sincerely Yours (1955) starring Liberace, Joanne Dru & Dorothy Malone in a remake of George Arliss' creaky but likable The Man Who Played God (1932). Liberace is an awful actor but he's so nice here you can (almost) understand why Joanne & Dorothy are tying themselves in knots over him. He plays (naturally) a "brilliant pianist" who becomes ill for a time and then stumbles around his strangely decorated penthouse looking for something to live for. Gordon Douglas, who directed some very entertaining films (Them!, Come Fill the Cup, I Was a Communist for the FBI, Between Midnight & Dawn, oodles of Our Gang shorts) was at the reigns behind the scenes of this one. It really must be seen to be believed. Here's a clip:

I'm actually seeing why he became such a big star . Despite the bad acting, he's very likable, and during the musical interludes I detect something I never noticed all those years ago watching him on Ed Sullivan - a ferocious ambition and drive, plus a charisma that almost forces you to watch him.

I laughed at the scenes with all the blue hairs disappointed that he was kissing Dorothy Malone. Even back then, he had a throng of older women lavishing him with their adoration.

The Sins of Rachel Cade, a bad movie with enormous entertainment value, is on TCM today, April 10th at 10:30am (ET). 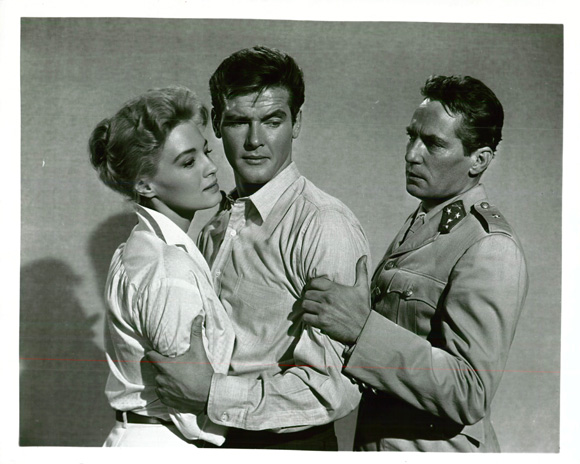 Above: Angie Dickinson facing her two dilemmas: Roger Moore or Peter Finch? Moral Collapse or Seething Repression? We should all have such bad luck to wind up in a jungle with these guys.

A young Facebook friend was posting about bad movies. She mentioned THE HAPPENING. I thought she meant the 1967 comedy, which I haven't seen. But she was referring to the M. Knight Something or Other disaster from a few years ago. She's right. That one is REALLY bad!
Top

OK folks, hold onto your hats or wigs (hairpieces) as the case may be - have I got a bad movie for you that you can love:

I well remember when this turkey was being made and visiting the set with Cheryl, Lana's daughter (she was 13 and I was 14). The sets were gigantic and 'out-of-this-world' and the huge snake entwinned bull shaped idol really scarred us and impressed us. I wonder what happened to it??
After this film and the next, "Diane" (1956), another stinker, Lana's career at MGM was over!!

Some gossipy trivia for you:
Lana and Edmond Purdom had a bit of an affair and it brought the end (among other reasons) to her marriage to Lex Barker).
Interestingly, Linda Christian ended Lana's liaison with Edmond, just as she destroyed Lana's affair with Tyrone Power some years before.

TCM is airing A Fever in the Blood (1961) tomorrow, May 14th at 4pm (ET). Angie Dickinson, the late Efrem Zimbalist, Jr., Don Ameche and an obscure actor named Carroll O'Connor pop up in this political potboiler. 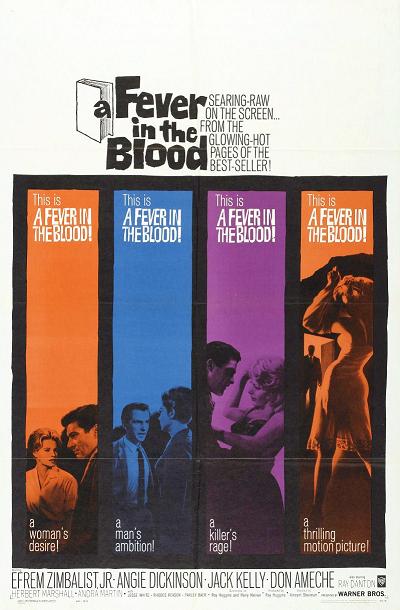 All I can really remember about it from my distant childhood was that Efrem looked mighty fine to me in a plaid shirt & it was a shock to see the inventor of the telephone being seedy...see what you think of this epic, and, if you like, peruse Angie's chagrin over being sold down the river by Howard Hawks appearing in this film...now if only TCM would show The Bramble Bush (1960), my collection of Angie Dickinson Early Movie Missteps would be complete.: